What's the first example of fairies being divided into Summer and Winter Courts?

A lot of people seem to believe that this is an established part of fairy legend - when I'm talking to fans of Gothic "real faeries" (as opposed to the child-friendly Enid Blyton kind) they often mention this. But I'm not sure that it actually is any older/more authentic than those things.

Wikipedia says that the idea of Seelie and Unseelie Courts does occasionally appear in Scottish folktales, and that they may have got the idea from Norse mythology, which does, at least sometimes, divide its "elves" ("alfar") into "light elves" and "dark elves". The Summer and Winter Courts, though, I haven't from a quick look been able to track down any mention of at all other than modern fantasy fiction.

(I've heard that there's a scholarly theory that the two rival "kings of Annwvyn" in the story of Pwyll Lord of Dyfed in the Mabinogion were meant to represent winter and summer (it's mentioned in the introduction to my copy), but that's only a theory and is not in any way spelt out in the story.)

Is this in fact a recent invention, and if so, who started it? What's the earliest reference to fairies being divided into Summer and Winter Courts?

In Victorian children's literature, fairies were responsible for painting the flowers, decorating the autumn leaves, or bringing snowflakes - and unlike Shakespeare, there were separate kingdoms. Fairies of spring, summer, autumn and winter worked in exclusive groups. In some books, they had their own monarchs, or there might be rivalries between groups.

The blog's author gives several examples, starting with a pantomime from 1860 that features a fairy queen of spring named Azurina, and an 1870 extract from the Circular and Catalogue of the Albany Female Academy about "The Fairies of the Earth and their Hiding Places" by Lizzie Beach. Here's a sample:

Next come the fairies of spring. The first spring sunbeams and the raindrops, are the fairies that call the flowers forth. At first they roam over the bare earth, and light upon the naked twigs and branches, but, at their magic touch, all trace of the frost fairies work disappears, the flowers appear, the birds come back, the trees put forth their leaves, and the brooks burst their frozen fetters. They that effect this great change have very gentle voices to be heard by so many, for, though the raindrops whisper softly, no mortal ear ever heard the sunbeams. They are both nature's best painters, for not only do they give the leaves their green mantles, and the flowers their bright, tinted robes, but after some great storms, when we have become frightened by the thunder and lightning, they bring forth a beautiful rainbow of seven shining colors, to tell us the danger is past.

The fairies of summer are the invisible imaginary ones that we read of, who dance in the moonlight, ride in chariots of acorn cups drawn by butterflies, and banquet off mushroom tables.

Of the autumn fairies Jack Frost is king, for it is his favorite painting time. We know when he is coming, for in the air there is a sharpness which he always carries with him. At night we have the leaves fresh and green. but in the morning there is such a change! Jack Frost has been painting them in the brightest of colors, and every leaf has a deep edge of scarlet, so that the very woods seem to be on fire.

The blog's author goes on to say that the idea of conflating the Summer and Winter courts with the earlier lowlands Scottish tradition of Seelie and Unseelie courts comes about mostly from Jim Butcher's The Dresden Files:

However, what really tipped the scales was Jim Butcher's bestselling fantasy series: The Dresden Files. The 2002 novel Summer Knight introduced the fairy rulers. Butcher had the idea of conflating the seasons with the idea of the Seelie and Unseelie Courts - a concept from late Scottish folklore, which I examined recently on this blog. Thus, his fairies are split into two factions: the Seelie (or Summer) fae, ruled by Titania, and the Unseelie (or Winter) fae, ruled by Mab.

Since the publication of this book, Butcher's system has grown huge in fairy fantasy - Titania and Mab as opposing seasonal queens, the seasons divided into Seelie and Unseelie, etc. Many authors seem to have lifted it wholesale straight from Butcher.

Prokofiev's ballet has a somewhat different take on the story than we see in Disney's animated movie, in that the fairy godmother summons the fairies of Spring, Summer, Autumn and Winter for assistance when she turns Cinderella's rags into a beautiful dress, a pumpkin and mice into a carriage and horses, and grasshoppers and dragonflies into a retinue of footmen.

The ballet is based on Perrault's version of Cinderella, which is older than the Brothers Grimm version, but his story doesn't include the seasonal fairies, which may be original to Prokofiev's ballet. 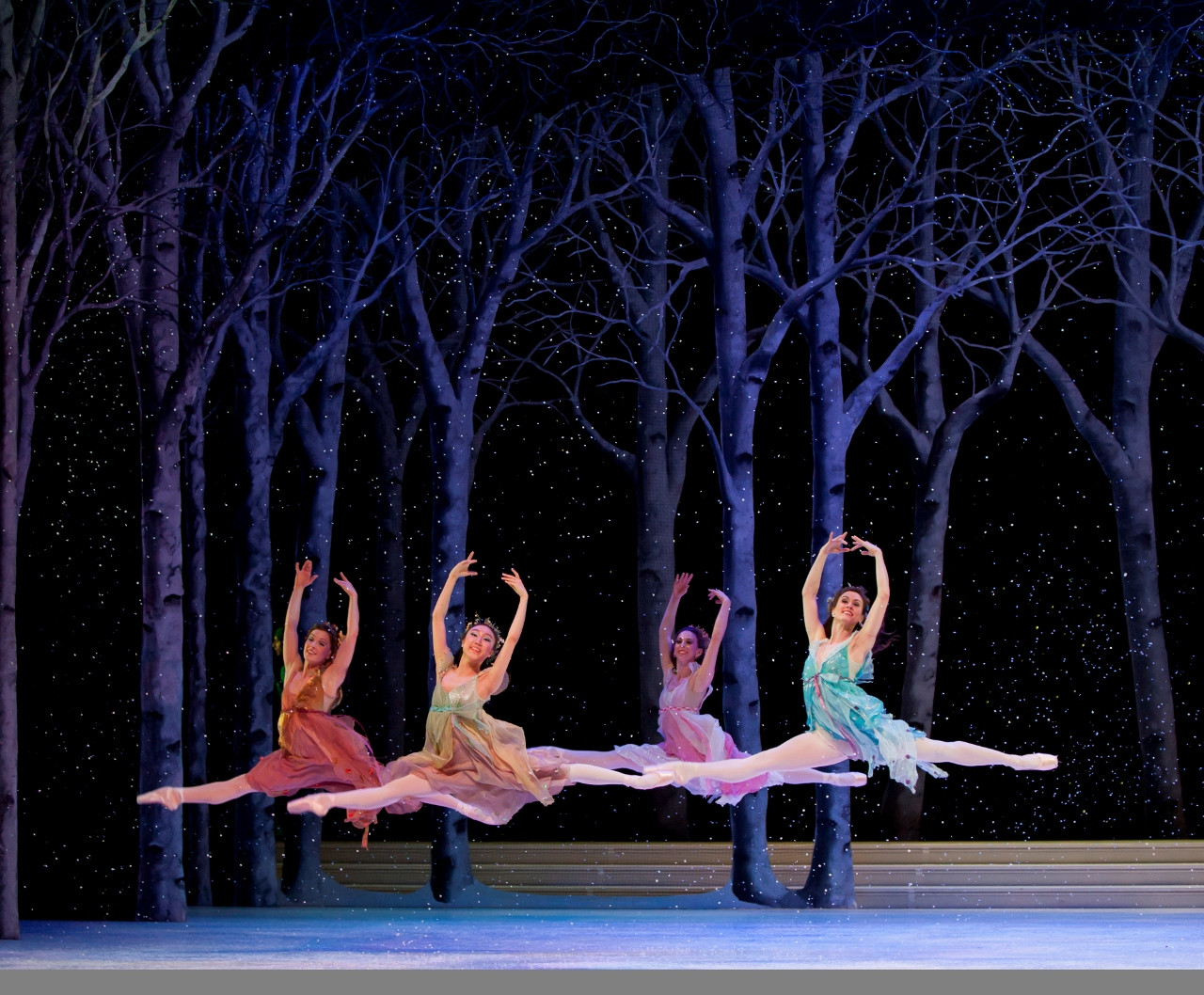 The seasonal fairies, in a production of Cinderella from Washington Ballet.

This may only be a partial answer, but you could possibly trace it to the Greek myth of Persephone and Hades, specifically the Rape of Persephone (rape as in the Greek "raptus" - "carried off"; from which we get the word "rapture"). Persephone is a goddess/nature spirit associated with two domains - the Underworld (essentially the place the spirits of the dead go) and with the upperworld and with winter and spring/summer respectively.

In Greek mythology, there are a number of classes of supernatural beings - gods/goddesses, as well as nature spirits (e.g. dryads (trees), naiads (water)) who blend more or less seamlessly into each-other, so you could interpret relatively minor goddesses, like Pesephone, as queens of the spirit world.

So, what we have here: Winter and summer courts, goddess/spirit ruling the courts. No elves/fairies though.

Not the answer you're looking for? Browse other questions tagged history-of mythology urban-fantasy fairy or ask your own question.