Manga where a kid is born from a forgotten island of heroes far away, and left the island for an adventure

I read a manga ages ago where a young boy is a child born from a faraway island of heroes, and he left the island for an adventure. He goes into the capital of a kingdom and meets a mage who is the disciple of the leader of the heroes on the island, and forces the disciple to take care of him.

After that, I think he meets a girl who got cursed by a type of belt that wrapped around her head, making her look scary/depressed. She couldn't take it off until the boy helped her, then she fell madly in love with him.

story-identification magic manga
Share
Improve this question
edited May 10 at 3:24

This has to be Suppose a Kid from the Last Dungeon Boonies Moved to a Starter Town.

Follow the story of Loyd, an oblivious boy from a village in the countryside, who wishes to become a soldier in the capital. After convincing the mayor of his village, a loli witch, who is over a 100 years old, he sets off to the capital to fulfill his dream!

I wasn't sure at first, because your initial description was a little off, but with the extra details you added in your last edit, there's just too much that matches for this not to be the same manga.

The protagonist is Lloyd Belladonna, and he's not from an island, but a remote village in a monster-infested region next to the last dungeon.

Also, the village isn't forgotten. It's actually quite famous because it's the home of legendary heroes and their descendants, but normal people don't venture into that region, because it's so dangerous. The residents of the village are only able to survive there because they're all abnormally strong, and taking down monsters is no big deal to them.

Anyway, at the start of the first chapter, Lloyd leaves his home of Konron Village and journeys to the capital of the Azami Kingdom -- both of which are located on the same continent -- where he hopes to sign up as a soldier. The mayor of his village, Alca, gave him a special crystal and told him to find the Witch of the East Side -- also known as Maria Azami, daughter of King Azami -- who'd take care of him, since she used to be Alca's student.

In the second chapter, Lloyd meets Celine Hermione -- also known as 'The Cursed Belt Princess' -- who, as a little girl, wrapped a belt she found among her father's collection of 'unusal items' around her head, and had been stuck with it ever since, because no one had found a way to remove it.

Soon after meeting and being touched by Lloyd though, she finally manages to remove belt, much to her relief. She then recalls an old man once telling her that a strong person's power could remove the curse, and subsequently becomes infatuated with Lloyd.

Note that I've used the spellings of the various names from the actual manga in this description. The website I've provided links to uses slightly different spellings, which appear to be derived from the anime. 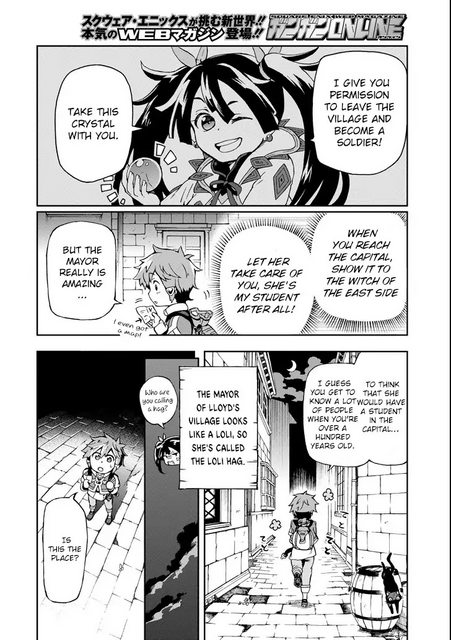 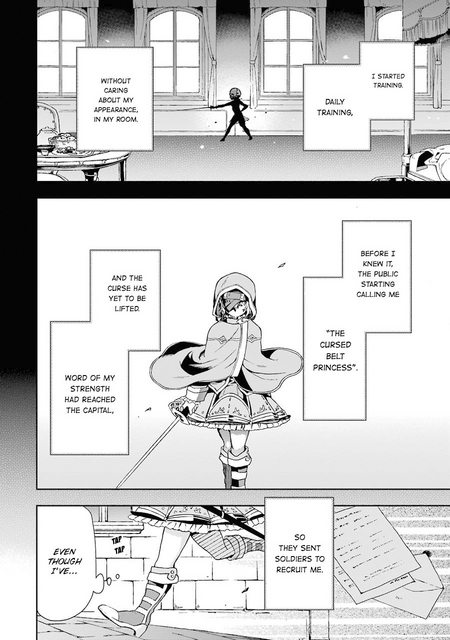 9
Looking for title of a fantasy fiction with huge war, invader on airship with warlock, island fortress with sorcerer, mnemonic storyteller and dragon
5
Manga where the main character sees the group of heroes defeating the demon king, gets stabbed in the back and reborn into his younger self
8
Manga where the main character researches magic for ages in a cave
5
Woman transported to a medieval world, recruited by a prince to help his friends
7
Book where a girl lives on a farm and plays with a ghost boy only she can see
8
A manga world where no-one dies and heroes & monsters sent their representatives to fight for entertainment
4
Manga - the weak MC runs away from his lover... he lives in the wild and becomes strong