I'm looking for a TV series from around 2010-2014. I think it was an animated show following a kid who builds(?) things that he can use to duel people. In a duel, it's 1-v-1 and you pick a battlefield, then either play as or instruct your monster to fight.

I think the kid had black hair and I think the monsters were more human-like in appearance (standing on two legs with two arms holding weapons), rather than monstrous.

It's not Chaotic or Kaijudo.

story-identification tv anime
Share
Improve this question
edited May 9 at 3:45

Not a lot to go on here, but I'm going to throw out Redakai (2011–2013) as a possibility, since it fits your timeframe, and stars a black-haired boy who can transform into a humanoid battle creature.

Redakai: Conquer the Kairu, also known simply as Redakai, is an animated series that premiered on YTV and later Teletoon in Canada on July 9, 2011, on Cartoon Network in the United States on July 16, 2011 and on Canal J and Gulli in France on October 22, 2011. The series was created by Vincent Chalvon Demersay and David Michel and was co-produced by Canada's Spin Master Entertainment and France's Marathon Media in association with Canal J and Gulli. Like Totally Spies! and Martin Mystery, which were also produced by Marathon, the show's animation style has been compared to that of anime.

The Cartoon centers around a boy named Ky Stax and his friends Boomer and Maya who quest around the world trying to collect an energy called "Kairu", the life energy of the universe before the villain Lokar and his minions find it first. They do this by fighting other teams and transforming into monsters. The episodes are different every week without much of an overarching plot.

Could it be Medabots? It was made in 1999-2000, but there could have been replays. The hero is a black-haired boy and he battles with robots.

Medabots, known in Japan as Medarot (メダロット, Medarotto), is a Japanese-Canadian role-playing video game franchise created by Rin Horuma (Horumarin) and currently owned by Imagineer. The main series of RPGs focus on collecting and battling with the titular robots. The bulk of the games releases have been on Nintendo platforms, including the Game Boy family, Nintendo GameCube, and the DS and 3DS handhelds.

The series was adapted into a Japanese anime television series spanning two adaptations. The first was animated by Bee Train while the second, Medarot Damashii, was animated by Production I.G. The television series originally aired on TV Tokyo from July 2, 1999 to March 30, 2001. Both series were originally licensed and localized into English by Nelvana and were broadcast on YTV in Canada and Fox Kids and ABC Family in the United States from 2001 to 2004. 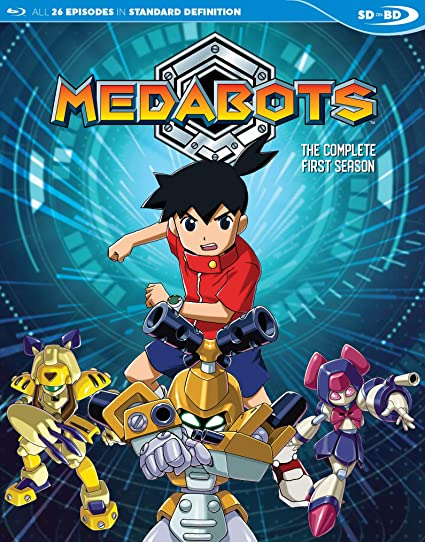 6
Identify this 80's styletelevision show with witches and a kid who transforms into a vehicle
8
Animated fantasy show about a red-haired girl and two boys
4
Fantasy show where a kid uses crystals to summon creatures
5
Anime about a boy who summons a blue 'legendary' monster that fights other monsters
1
Old TCG style show where kids would fight tournaments in a battle dome with their monster cards
4
Anime: boy transforms into white+orange being after a terrorist attack
5
Comic book - Man inherits a property (a church?) inhabited by monsters, falls in love with a water monster