Looking for a book that is sci-fi/thriller maybe about a robot girl?

I read this book about 7ish years ago in the library at my middle school. The plot that I remember is there’s this girl who is a robot (I think) and she didn’t know that she is and when she finds out she runs away from the lab she’s from into like a forest of some kind (maybe the rainforest).

I don’t know if I ever finished it, I think she got out. But, I’m pretty sure the title was one word and I know the cover was green … like I think it had leaves and stuff on it and I’m pretty sure it had a white figure on it … like maybe an outline of the main character. I just got the faint memory of the book and it’s been bugging me.

In the heart of the Amazon rainforest, there is a scientific lab and living compound called Little Cambridge. Little Cam houses some of the world’s top scientific minds, including geneticists, biochemical engineers, botanists, and entomologists.

The fruit of five generations of genetic experimentation and injection of a toxic, but immortality-giving extract from the rare bloom, elysia, Pia is the only one of her kind, and a scientific breakthrough that means the beginning of a new, immortal brand of humanity. Pia is the hope for humankind’s future – she has perfect memory, razor-sharp reflexes, and superhuman speed and endurance. Her skin is impervious to harm, and cannot be penetrated by any blade, flame, or trauma. Every day of Pia’s life, she has been told that she is perfect by the scientists that have raised her – yet, the thing she yearns for most of all, the right to join the Imortis Project and be embraced as a full-fledged scientist with the aim of creating a super-race of immortals like her, is still out of her reach. For all that Pia is perfect, she is not yet ready for whatever the Imortis Project entails, until she can pass a series of psychological and scientific tests.

On the eve of Pia’s eighteenth birthday, she discovers that the electric fence that surrounds Little Cam has a hole – and she does something she’s never even dreamed of doing before. Buoyed by the confidence and good spirits of her first ever birthday party, Pia sneaks through the hole and braves the jungle outside for the first time…and she runs into a boy named Eio, and discovers an entirely new world. As she learns more about Eio and his tribe, the Ai’oa, Pia’s view of her destiny changes, irrevocably. At what cost does immortality come? And is Pia ready to pay the price for eternity?

The cover, title, publication date, and premise all fit your general description, except that the protagonist, Pia, isn't specifically described as a robot, but rather a perfect girl with enhanced memory and reflexes and impenetrable skin. 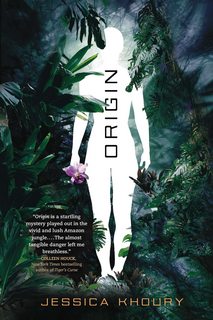