Looking for some help, please, finding a novel I read in the '90s (I think mid-'90s). I have the vaguest memories of a hot pink border on the cover.

The plot involved a teenage female protagonist going out on a FTL flight (I think with family?), and after some disaster (very vague memories, but I think they discovered hostile aliens, or at least dangerous alien tech), she essentially supercharges the FTL to take her to the end of the universe. When the universe ends, it immediately big bangs again and history plays out exactly as before. Essentially because a cosmic-scale time loop of tragedy.

One of the first scenes (if this helps) is the protagonist as a teen being approached by a woman who looks like an older, sadder version of herself (FORESHADOWING!!) and having a feeling that the woman wanted to hurt her, but just wishing her well, then tearing up behind sunglasses and leaving.

Been trying to find it for years with no joy. Any help would be amazing, thanks.

NOPENOPE
14311 silver badge66 bronze badges
New contributor
NOPE is a new contributor to this site. Take care in asking for clarification, commenting, and answering. Check out our Code of Conduct.
12
|  Show 7 more comments

I can't find a cover image that really matches your description, but the story of a teenager who goes on a trip that turns into a voyage past the end of the universe seems to match The Starlight Crystal (1996) by Christopher Pike. 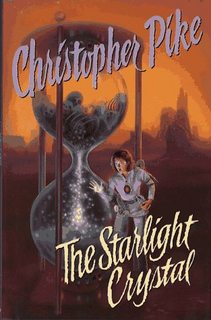 Quoting from a fair in-depth synopsis on Tumblr:

Yes, Earth is attacked and destroyed just as they are starting to decelerate. These alien warships have the technology to keep up with Paige’s ship at its high speed, and they catch it and send a boarding party. Paige’s dad plans to blow up the ship so that they can take out the alien commander (like in Shari’s story), but she (the commander) kills him before he can trigger the explosion and takes Paige hostage.

However, the guard who is supposed to take Paige to their ship instead takes her to the engine room, where he says he has a power source that will accelerate their ship away from the attackers. He climbs down and inserts a green crystal into the power core, upon which he is killed by his captain. She levels her weapon at Paige, but the ship’s first officer cuts her down before she can fire. Then they check their instruments, and sure enough: the alien warships are gone, and their ship is infinitely approaching the speed of light, and their engine can’t produce the power required to slow them down, to the point where they will simply outlive the universe.

Paige is supposed to get back on the ship, empty it out, and take off with more green crystals, wait out a cycle of death and rebirth in the entire universe, and then come back to Earth the way she left it the first time.

Her first thought, upon returning to Earth, is to break the cycle, to say fuck you to destiny and keep herself from having to suffer. So she gets a gun and some sunglasses and finds herself outside the library. But she can’t pull the trigger. Instead, she directs herself to the pond, just as before

Note that the back cover of the book is hot pink: 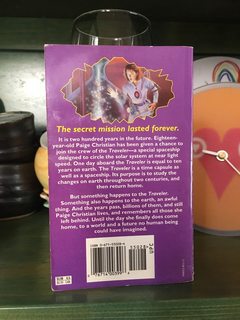 Not the answer you're looking for? Browse other questions tagged story-identification novel space ftl-drive or ask your own question.

12
Fantasy novel - Female protagonist with one arm
19
Old SF novel about a white-haired young woman, alien or half-alien, who tutors human kids
8
What SciFi series has a female protagonist/pilot member of a small Earthly explorer corps?
11
80s/90s fantasy book: female protagonist, demon-related magic, "knife"/"blade" in title...?
12
Short online story in which protagonist is the last holdout against advertising products to friends
8
Horror novel about an immortal snake-woman, feeds on blood and can take over human bodies
23
Fantasy series where magic smells faintly of sweet almonds