A humorous short story from an anthology read 1970-80s.

Humans have established a space station that orbits both stars of a twin system. As a result days and nights are of radically different lengths.

The worse problem is during the journey from one star's proximity to the other they pass through some sort of psionic field that distorts human's perception of reality. Basically real objects and people will appear to be random silly things like bouquets of flowers and soft toys.

They try not to do any work during these periods but the space station is gradually falling apart and badly needs maintenance, which is hampered by not being able to identify things. They need more engineers to get the work done during the good hours.

The MC boss of the station is pulling his hair out over this and badly wants to go home. To that end, during the psionic disturbance, he sends a heartfelt message to Earth...

Later when they come out of the field he receives a fast reply: OK and a date.

So it nears the date, a ship from Earth is due in and the boss prepares to leave on it. However, when it docks he is surprised to find it hasn't come to take him away. It has brought a new crew member, an additional engineer and his name is...

This is the Fredric Brown story "Placet is a Crazy Place" (1946). ISFDb offers this synopsis:

A man attempts to manage a research station on a planet in a distant system, where the weird laws of physics cause people to have hallucinations for 4 hours a day, and where birds composed of dense matter flying through the dense matter bedrock destroy the foundations of any building.

As you can see from the ISFDb link, it's been in a remarkable number of collections over the years: 8 English-language anthologies just through the 1970s and 80s with 2 alone by Asimov/Greenberg.

Days and nights are wildly varied because of a weird orbit around a binary sun:

I mean, you’d have a six-hour day and then a two-hour night, and then a fifteen-hour day and a one-hour night and — well, you just couldn't keep time on a planet that does a figure-eight orbit around two dissimilar suns

Placet is subject to an effect called the "Blakeslee Field" which causes visual hallucinations:

And that, the physio-psychological effect, is something else again. The field does something to the optic nerve centers, or to the part of the brain to which the optic nerves connect, something similar to the effect of certain drugs. You have — you can't exactly call them hallucinations, because you don't ordinarily see things that aren’t there, but you get an illusory picture of what is there.

Things appear to be randomly different:

I knew perfectly well that I was sitting at a desk the top of which was glass, and not grass; that the floor under my feet was ordinary plastiplate and not a sheet of rippling water; that the objects on my desk were not a pink flowerpot with a Saturnian lizard sticking in it, but an antique twentieth century inkwell and pen — and that the "God Bless Our Home" sampler was a radiotype message on ordinary radiotype paper. I could verify any of those things by my sense of touch, which the Blakeslee Field doesn’t affect. 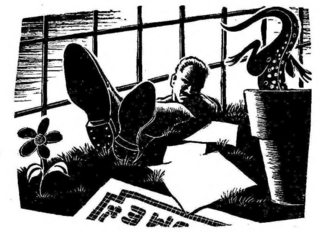 Buildings are constantly being undermined by the "birds":

The two-headed monster said, "Chief, the machine shop is wobbling. We may have to break the rule not to do any work in mid-period."

Both of his heads nodded. "The underground part of those walls must be like sieves from the birds flying through 'em, and we'd better pour concrete quick. Do you think those new alloy reinforcing bars the Ark'll bring will stop them?"

The Chief wants to quit:

He'd been heading for the door. He turned. "Yeah, chief?"

I said, "I want you to send a message on the radiotype to Earth Center. And get it straight, two words: I quit."

The response is rapid and terse:

He said, "Answer to your radiotype just came." He crossed over and dropped it on my desk. I looked at it. "O. K. August 19th," it read.

The bit you remember about the Chief's message getting messed up:

Reagan grinned. "Good," he said; "I've been busting to tell her. It'll be swell to see Ike again."

Reagan's grin faded. He said, "Phil, are you slipping, or something? Don't you remember giving me the answer to that Earth Center radiotype four days ago, just before Mike got here?"

I stared at him with my mouth open. I hadn't even read that radiotype, let alone answer it. Had Reagan gone psychopathic, or had I? I remembered shoving it in the drawer of my desk. I jerked open the drawer and pulled it out. My hand shook a little, as I read it.

REQUEST FOR ADDITIONAL ASSISTANT GRANTED. WHOM DO YOU WANT FOR THE JOB?

I looked up at Reagan again. I said, "You're trying to tell me I sent an answer to this?"

He looked as dumfounded as I felt.

"Ike Witt." He stared at me. "Chief, are you feeling all right?"

You can read the full story (what's left of it) in the May 1946 Astounding at the Internet Archive.

15
Sci fi short, about birds that flew through soil and rock as if it was air