Translation for a LOTR tattoo

I want to get a LOTR tattoo with the quote “Until the stars are all alight” in Tengwar. If anyone can help me translate it I would be so grateful.

With contributions from and credit to @Yasskier and @Little Pickle, "Until the stars are all alight" is a line from "A Walking Song" which was was the name given to the song that Frodo Baggins, Peregrin Took, and Sam Gamgee sang just before they saw the Black Rider a second time while walking to Crickhollow. Bilbo Baggins wrote the lyrics to an old tune.

Whilst "A Walking Song" is not sung in The Lord of the Rings: The Fellowship of the Ring, most of its last verse is sung in The Return of the King, by Pippin to Denethor while Faramir is attempting to retake Osgiliath. In the soundtrack of the film, this track is named "Edge of Night".

Using https://www.tecendil.com to help translate and by looking at existing known phrases to match syntax, we can build a translation to Sindarin, the Common Elven Tongue of Middle Earth where "until" translates to "aden", "all" translates to "pân" and "stars" translates to "êlin" (plural of êl). Whilst I cannot find a good translation for "alight", I would suggest that "síla" meaning "to shine, shines" would be the equivalent.

An English to Sindarin translation of "Until the stars are all alight" would then be "Aden pân êlin síla" but would literally translate as "Until all stars shine."

This can then be wrtten in Tengwar script as follows (source www.tecendil.com): 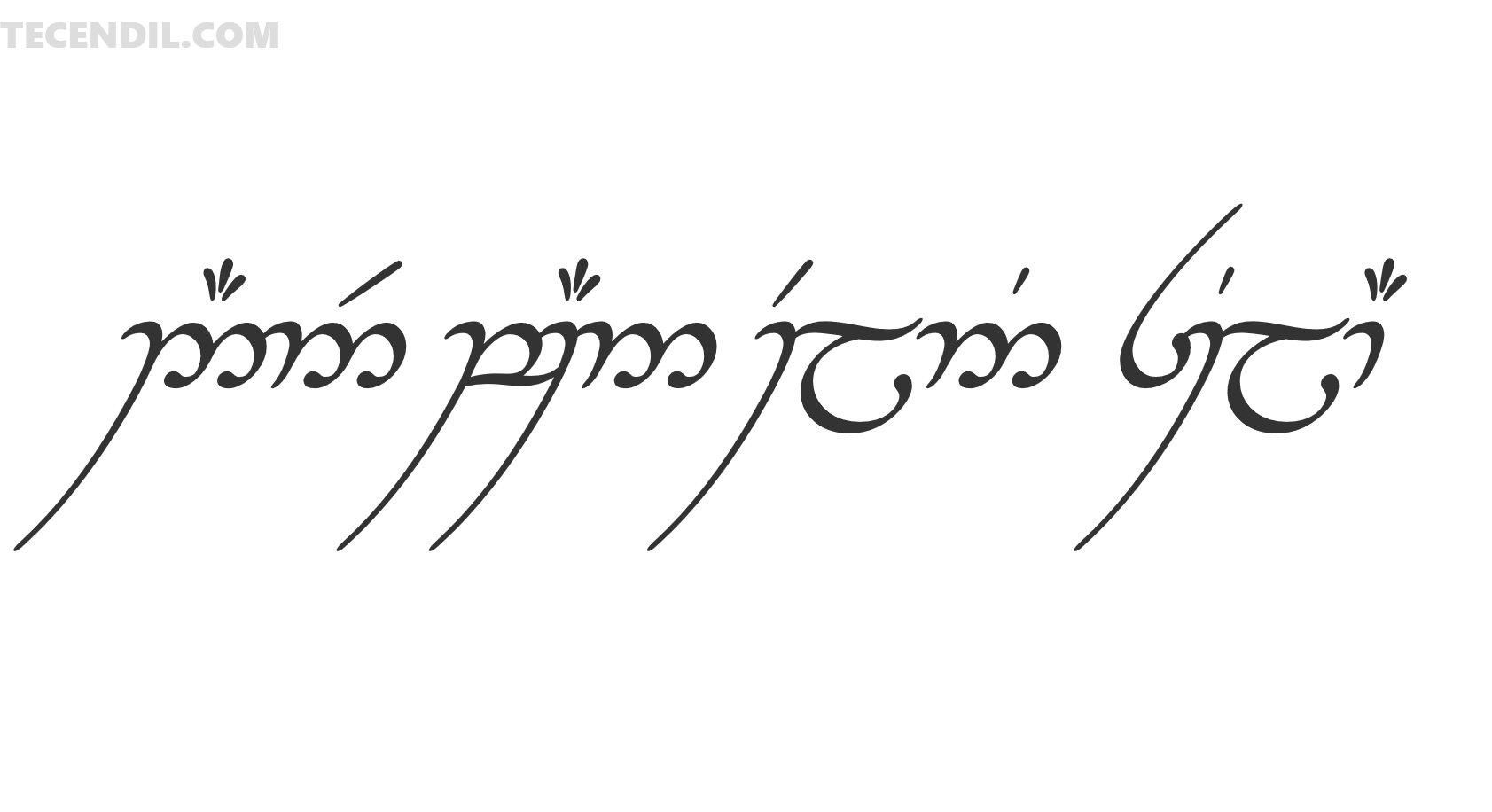 However, the site also allows you to convert English language directly into Tengwar Script without translating to Sindarin which allows you to keep the words you may want them to read as (source: www.tecendil.com) 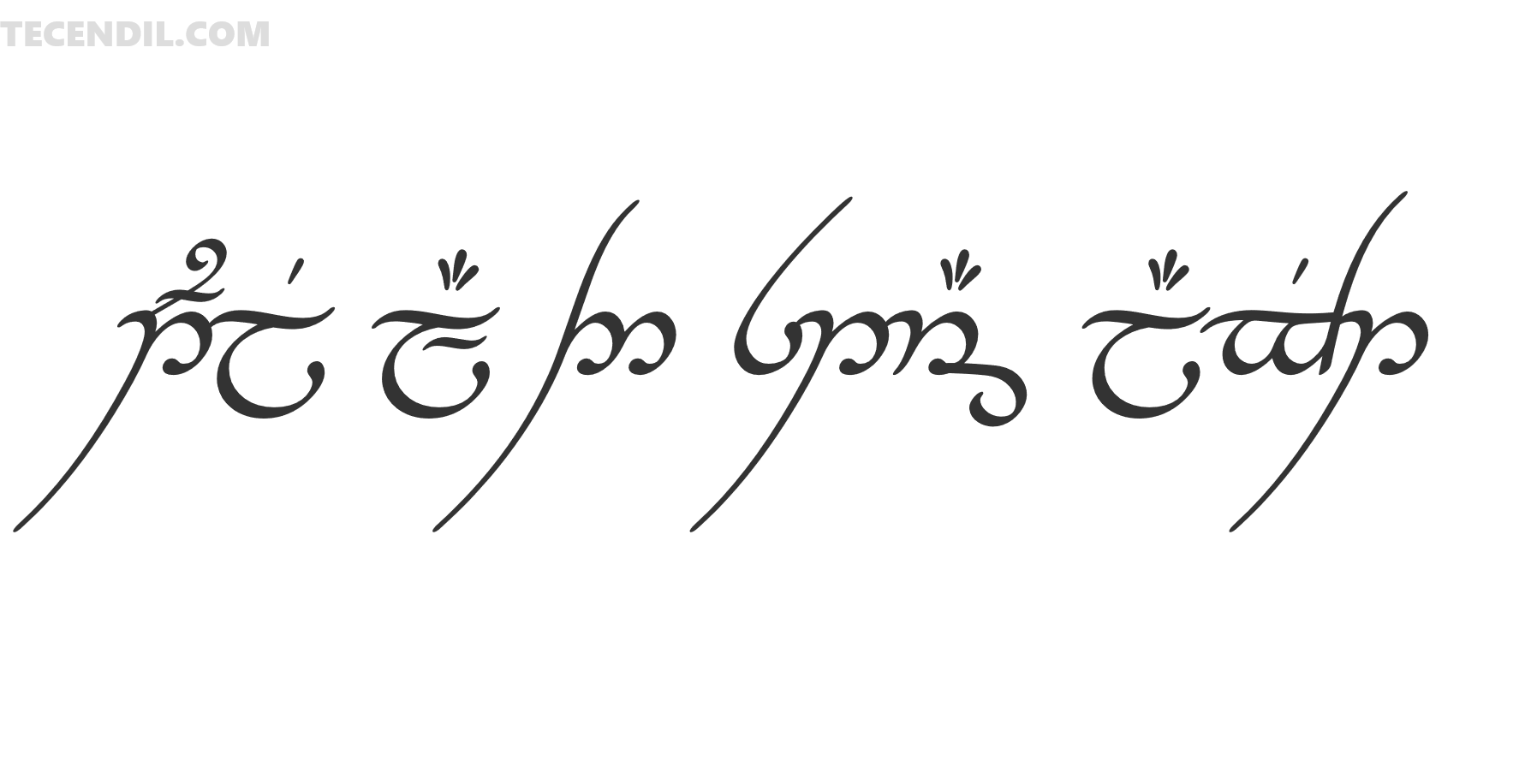 You can see that there is a big difference in the look of each and your choice may come down to preference. There are multiple fonts available as well. My preference is the Annatar italic shown in the images above.

I would recommend that you do more research and ask multiple sources for input before you make any decisions. For example, there is a Reddit Sindarin that you could post questions to and get advice from keen Sindarin scholars and I would guess that you'll get quite a few conflicting answers.

If it was for me, I think I'd like it to be translated into Sindarin so that when some asked, I would be able to say the phrase and then translate into English. So, I would post my translation into the Reddit Sindarin site and ask for help, comments and input before committing to a tattoo.

Be warned that most online "translators" don't really translate. They don't even do proper transliteration.

This, for example, mentioned in the comments, is NOT a Sindarin translator as it claims. All it does is apply a Tengwar font to whatever "message" you put in. The output is nonsense. It's like you are typing English on a Russian keyboard (or vice-versa). You see, they don't usually map Russian Т to Latin T on the keyboard - The usual mapping is on N. So If I type здравствуй(zdravstvuj) on an English keyboard, it will produce: plhfdcndeq.

This here does a decent job as far as a simple program can achieve, and it knows it's only a Tengwar Transcriber. Still it's not perfect. For example, silent "e"s in English are transcribed with a different Elvish sign from non-silent ones. Apparently this program cannot handle it very well.

I certainly don't recommend the first one. I sometimes use the latter, but that's because I know what I'm doing. But if you only want a transliteration, the Transcriber actually produces the right (as far as I can tell) transcription for this particular sentence. It happens to know that the e in "are" is silent, and correctly transcribes it with a dot under.

If you want a translation in a stricter sense, you need to specify which language you want it to be translated into: Sindarin, Quenya, etc.

22
What does this text say, on a cover for The Return of the King?
10
Should I watch the Hobbit trilogy before the LotR trilogy?
57
Why wasn't Bilbo famous, by the time of LOTR?
5
Meanings of the names in the Hobbit and LOTR?
70
Elvish tattoo - can it be translated into English?
26
Has anyone gotten married more than once in the LOTR universe?
23
Identify this tribe from "Lord of the Rings", and their eventual fate
6
Is this a correct translation into Quenya?
6
Elvish transcription - Upon the Hearth the Fire is Red