There was a series of books/novellas in the '70s or so, involving a very depopulated Earth due to a chemical/drug error that made all females who lived in modern society infertile. A prophet had earlier started a cult where members withdrew from all modern society, and so those women were still fertile.

The hero and a woman meet on the East Coast, sail to Greece in a yacht preserved by "cocooning," have adventures, are saved by female warriors from Naxos in a helicopter gunship, and generally end up in the Med. The cult also has discovered time travel in the form of portals which open from time to time, by which priests take the message on into the future.

I have googled all sorts of combos of the above and never gotten a proper hit. Any help would be appreciated.

The Goodreads synopsis for the second book, The Bright Companion, bears the closest resemblance to your description, and the cover depicts a woman on a yacht:

When the by-product of the greatest contraceptive ever discovered turned out to be sterility for the next generation, the result was predictable. Within a century the population of the 'civilized' world dropped to a tiny remnant of narrow-minded survivors. Their few communities were ruled by hard-shelled fanatics whose prime need was women who could still bear children.

Anne had been such a trade-off "wife"and when she slew her captor and fled, there was only one who would help her. This was the young man whose hidden stock of medicines made him a necessity to the isolated homesteads.

The surprising and exciting adventures of Anne and David as they fled their barbarous pursuers and headed for a legendary sanctuary far across the ocean is a realistic and imaginative projection of a world that yet may be. 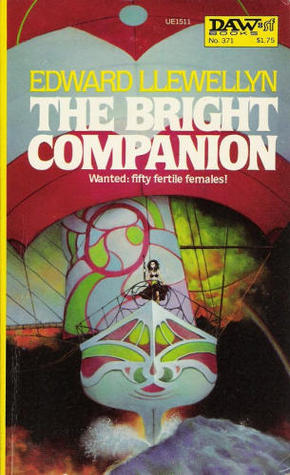 Not the answer you're looking for? Browse other questions tagged story-identification books time-travel soft-sci-fi or ask your own question.

18
What's this novel? A mathematician turned marine is transported to the future