Story with Iron Man jumping into a time portal to escape the Phoenix, before she destroyed the Earth

The Phoenix is brought back by a dying man wanting to destroy the Earth, while Tony Stark watches. Tony jumps into a time portal to escape at the last minute. He goes through different time frames of his life, in order to come back and save the world.

The dying man you mentioned would be Donald Birch.

As shown in Tales of Suspense Vol. 1 #63 (March, 1965), he was at one time an employee of Stark Industries, but grew resentful towards Tony, due to feeling undervalued, and ended up becoming a costumed criminal known as the 'Phantom', which resulted in him being unmasked, arrested, and fired from his position at Stark Industries.

In "Iron Age", Tony is kidnapped by a now cancer-ridden and wheelchair-bound Birch, who still holds a fierce grudge, and has managed to acquire and reassemble the pieces of Dr. Doom's Time Platform in the years since his prior arrest. He plans to make Tony watch as he uses the Time Platform to pluck the Dark Phoenix version of Jean Grey from an earlier point in the timestream -- corresponding to the "Dark Phoenix Saga" published in 1979 -- then manipulates her into destroying the Earth. She does in fact destroy the Earth, but just before that, Tony manages to leap onto the Time Platform, and is transported to the time period Jean was plucked from.

In this earlier time period, Tony borrows an old Iron Man armour from his younger self -- who was a full-blown alcoholic at the time, and consequently not of much use, other than supplying the spare armour -- and with an assist from the Hank Pym of that era, ends up travelling to different time periods, trying to locate the pieces of Doom's Time Platform before Birch can get to them, in an attempt to prevent Earth's destruction.

During his trips through different time periods, he recruits younger versions of various heroes -- including Power Man (Luke Cage), Iron Fist, Captain Britain, Cyclops, and Yellowjacket (Hank Pym) -- and as a team, they travel to the point in time shortly before Earth was destroyed, and manage to stop the Dark Phoenix before she can enact that event.

Iron Man sacrifices his life in the process, however, as a result of these changes to the timeline, the slightly younger version of Tony who'd been kidnapped by Birch isn't transported back in time this time around, and effectively replaces him in the timestream going forward. Also, all the other heroes from earlier eras (including Jean Grey) are sent back to their native time periods, via the Time Platform. 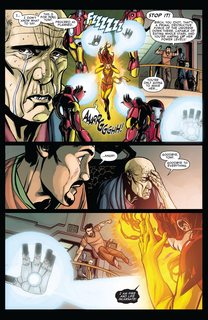 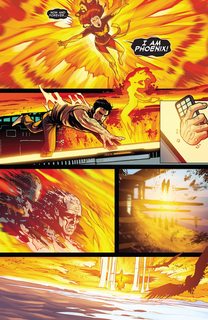 Not the answer you're looking for? Browse other questions tagged story-identification marvel time-travel iron-man or ask your own question.

6
Why didn't Iron Man's Phoenix Alarm go off?
6
Having read Iron Man's original origin and seeing it mutate over the years, is it still considered canon?
12
Doctor pulled to the future to save a leader in a time when medicine is banned
15
Why were Captain America and Black Widow in such a hurry to close the portal?
12
Early sci-fi short story of a man who wanted to be buried on Earth, but the cost was too high?
19
Time travel short story where a man arrives in the late 19th century in a time machine and then sends the machine back into the past
3
How is Burnham's Mom able to find her?
32
Why didn't Stark and Nebula use jump points with their ship to go back to Earth?
4
Is Iron Man: Armored Adventures a purely stand alone series, or does this version of Tony exist in some other universe outside of 616?
7
How did Rhodey survive?