According to Harry Potter Wiki

Mnemone Radford was the witch who first developed Memory Modifying Charms. She became the first Ministry of Magic Obliviator, due to her skill with the charm.

When exactly did she do this?

harry-potter spells
Share
Improve this question
edited May 17 at 17:32

Sometime after 1707, most likely

Except that she died a good 58 years before that date.

So there appears to be an inconsistency.

Perhaps someone involved was false-memory charmed!

This factoid seems to relate to one of the Wizard of the Month cards that appeared on JKR's original fan site. It notes that she developed "memory modifying charms" but doesn't outright state that she invented the memory charm, of which there are apparently several. 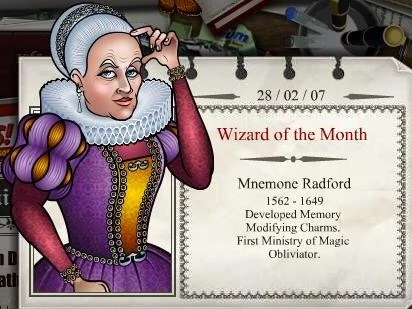 Note that although there's a discrepancy in her date of death (1649) and the formal foundation of the present Ministry of Magic (1707), there were apparently other bodies that governed the Magical world in Britain. It's certainly possible that she worked for the Wizard Council or an earlier Ministry and that this card is just over-simplifying her working history for the benefit of a Muggle audience or it may simply be a typo, given that wizards can live into their hundreds of years.

*Prior to 1707, the Wizards’ Council was the longest serving (though not the only) body to govern the magical community in Britain. After the imposition of the International Statute of Secrecy in 1692, however, the wizarding community needed a more highly structured, organised and more complex governing structure than they had hitherto used, to support, regulate and communicate with a community in hiding. Only witches and wizards who enjoyed the title of ‘Minister for Magic’ are included in this entry.

47
If Hermione had died on the hunt for the horcruxes, would her parents remember her?
18
Why isn't Harry in trouble when Tonks does magic around him?
4
Would Expecto Patronum work on Inferi?
5
Why wasn't the magic performed by the Advance Guard at 4, Privet Drive detected by the Ministry of Magic?
8
Do people who work at the Ministry of Magic know all their colleagues by name?
12
What is the most common defense in a duel in the Harry Potter books?
2
Harry didn't do magic, why does the ministry think he did?
9
How could Antonin Dolohov kill if his memory was wiped?