X-men comic about a citadel with an "all-powerful" gem

Back when I was a kid I remember reading an X-men comic where they get transported to some sort of citadel in another planet by a villain, in order to retrieve some sort of gem.

What I remember about it:

Anyone remember this comic and can give some details?

This is X-Men Annual Vol. 1 Issue 11 from 1987. The villain in the issue is Horde and it is his one and only appearance. Horde has a shard of crystal on his forehead and the gem he's trying to get is the full crystal, the Crystal of Ultimate Vision.

We can see the entrance to the palace, the Citadel of Light and Shadow, here with the statues lining the way: 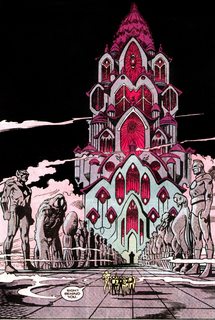 Horde eventually kills Wolverine as he gets to the crystal but as described a drop of his blood lands on the crystal and he regenerates: 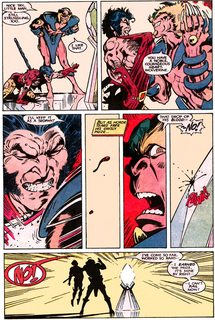 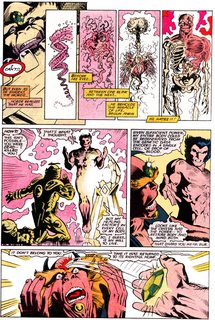 Wolverine does gain full omnipotence but gives it up almost immediately when he realises he starts talking like a god and destroys the crystal. I don't believe it ends with the message of passing a test though.

As per the description here:

the X-Mansion is attached by a demonic-looking villain who calls himself Horde. He easily bests the X-Men and teleports them away from the mansion, where he explains that he is an alien, but also a mutant of his race - and an immensely powerful one at that.

Then the shenanigans with the gems.

Horde appears and tries to claim [the gem] for himself. Wolverine throws himself between Horde’s spear and Storm, saving her life, but impaling himself in the process. Horde then tells him, “You have a noble and courageous heart, Wolverine. I’ll keep it as a trophy!” and proceeds to tear Wolverine’s heart from his chest.

After being regenerated wolverine destroys the gem.

The crystal also imbues Logan’s new body with enough cosmic power to kill Horde. Rather than keep the power for himself, however, Wolverine gives it up as soon as Horde is defeated and destroys the crystal. Good call, Logan.

Not the answer you're looking for? Browse other questions tagged story-identification marvel comics x-men or ask your own question.

9
When (and why) was Spider-Man called the most important hero of them all?
10
Who was the mutant who was Storm's stalker?
7
Old X-Men comic where team travels to alien world with a ring-like sun that needs recharging?
8
Horror comic about a vampire in space on a (possible) generation ship
35
Pre-1993 comic in which Wolverine's claws were turned to rubber?
3
80s Comic Book issue with young team battling villain wearing power armor