Movie with human-sized alien/bugs with guns

So all I remember is it having human-sized alien/bugs with guns. The bugs had some sort of, like, antennas in their mouths; they looked like whiskers, but they had just two each. Basically, they were taking over (or had already taken over) the majority of the population. I remember the movie being kinda gruesome, and it had a lot of alien guts. That’s all I really remember. I think it may have been in the sci-fi/horror genre.

story-identification movie aliens
Share
Improve this question
edited May 19 at 4:32

District 9 has most of the elements described: bugs with two prominent whiskers, guns, gore, body horror. 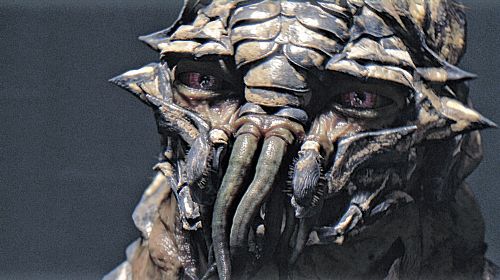 In an alternate 1982, a giant extraterrestrial spaceship arrives at Earth and hovers over the South African city of Johannesburg. A human investigation team finds over one million malnourished aliens (called "Prawns") inside, and the South African government relocates them to a terrestrial camp called District 9. However, over the years it turns into a slum, and locals from Earth often complain that the aliens are filthy, ignorant lawbreakers who bleed resources from humans. 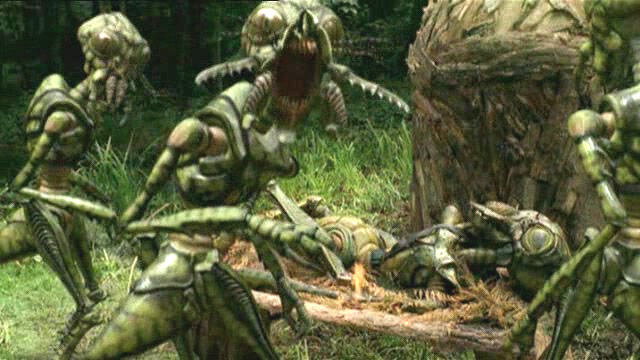 An astronaut doctor Ivan Hood and his fellow astronaut Kelly return from their mission in space to find the world has been taken over by aliens. Now Dr. Ivan Hood and Kelly must lead a revolution to free the human slaves from their alien masters.

The trailer features human-sized, bug-like aliens with guns, and somewhat antenna-like protrusions from their mouths.

Could it have been the tv show Falling Skies?

Starship Troopers?!! Most of the bug aliens are the size of us in this, and it was definitely about them trying to eradicate the humans and the humans at war with them, and some gruesome shocks happen in there too. Very gritty, but a bit funny too in a bunch of different ways. It was made into a movie in 1997. It was made into an Anime in 1988. And it was Originally a novel in 1959, written by Robert A. Heinlein.

Good luck in your quest! I know and like two of those other answers up there, so at least there's some good content on your way to tracking it down.