This is a paperback novel that I read in the 00s, but I am fairly certain that it was published earlier (probably circa 1970s). I believe that it was part of a series (the middle book of a trilogy?), but I think the series was composed of stories in the same universe, as opposed to stories about the same protagonist(s).

The part that is standing out in my memory was about a thing, something like a sculpture but possibly also electronicized, made (if I recall correctly) from a large number of interlinked loops and nodes in a kind of mesh. There may have been small beads or the like that could be moved along the wires from node to node. I think the whole thing could be stretched or deformed, which would rearrange the relationships between the various components.

If a person gave the thing his or her full attention, it was possible for the experiencer's mind to become intertwined with the structure of the sculpture, and it was possible for the mind to get trapped. If I'm remembering correctly, this had previously happened to some kind of villain, and the protagonist (or someone associated with the protagonist) has their mind trapped within the mesh while the previously-trapped villain takes over their body by escaping from the mesh.

It was an odd premise. I'm not sure that the event above had that much bearing on the overall story.

The author was not one that I was familiar with -- definitely not a big name like Asimov, Clarke, etc. I believe it was a man, but I'm not sure.

story-identification novel
Share
Improve this question
asked May 19 at 18:29

The three books feature a human-derived race called the Ler.

In Klesh, a young Ler has the device you describe. For her, it was some sort of aid to divination. 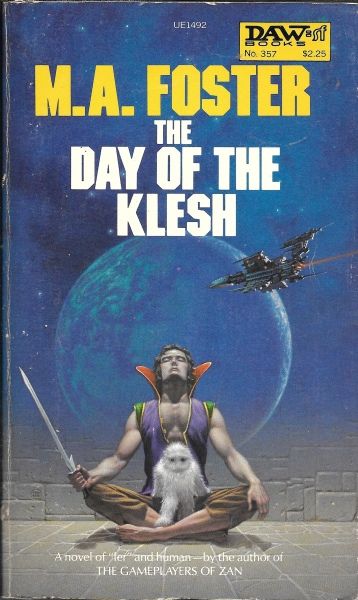 Somehow, the description sounds like a device from P.K. Dick's The Zap Gun.

To be fair, I don't think it is the book mentioned by the OP (for instance the kind of mind swap between the protagonist and the villain didn't happen in this novel), but maybe it could ring a bell.

As the OP wrote, the device in the book is not the main theme in the overall story (it is not even mentioned in the plot in the linked Wikipedia page), but it sounds a lot similar.

Toward the end of the book (I'm writing by memory),

the protagonists are able to develop an empathic weapon in order to stop the alien invasion: it is a kind of chessboard representing a labyrinth where a clumsy and likable creature is trapped. Whoever plays this game can't but feel compelled to try to solve the maze (by rearranging its mesh) in order to help the creature escape, but since it is a kind of unsolvable puzzle, he/she becomes "mentally trapped" inside the game, losing interest toward whatever other thing. This same toy is given not only to the aliens, but also to another human character who was plotting some kind of coup.