Why does Jack Torrance say “white man's burden” to the ghost bartender? [closed]

In Stanley Kubrick's fantasy/horror movie "The Shining (1980)", when Jack Torrance is talking to the ghost/apparition bartender, Lloyd, in the mysteriously restored "Gold Room" he says:

You set them up and I'll knock them back, one by one.

And then, apropos of nothing:

I know that "White Man's Burden" comes from the Rudyard Kipling poem supporting colonialism, but why does Jack say this? What is he referring to? 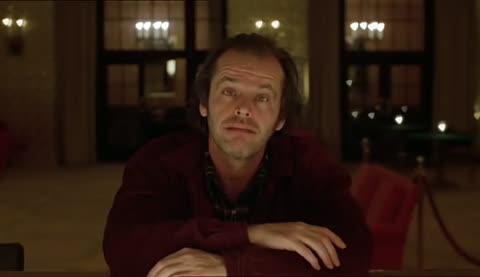 You can watch the scene itself here, if that helps.

According to The Shining: Jack of All Trades, Master of None, the line is a reference to the Kipling poem "that suggests that Europeans are the caretakers of the world."

But this is also Jack making a reference to alcoholism as the hidden price paid by the middle class for the cost of industrialization and the benefits of the technological society. That the cotton gin ultimately leads its beneficiaries straight to gin and tonics is one of the ironies of modern life that has left many of us still reeling.

IMDb explores some alternate interpretations in What is "White Man's Burden?"

Firstly, In the context of the scene, Jack could be referring simply to alcoholism and, as a former school teacher, he is making an ironic reference to Rudyard Kipling's 1899 poem "The White Man's Burden". It's possible that he is, quite simply, referring to the alcohol itself, calling it a burden in an ironic sense because he enjoys it so much, and referring to it as 'White Man's' insofar as the white man introduced alcohol into the Americas, hence they now have the 'burden' of drinking it. As such, he is, in effect, saying "Give me a drink, such is my burden."

There is another, more politically derived interpretation however, which may suggest an allusion to the European colonization of North America and the effect that colonization had on Native Americans. Merriam-Webster Online defines the phrase 'White Man's Burden' as "the alleged duty of the white peoples to manage the affairs of the less developed nonwhite peoples." The white man's burden was to raise non-white people out of poverty and ignorance through imperialism, whilst at the same time alcohol was turning white men into savages.

Although Kipling's poem mixed exhortation to empire with somber warnings of the costs involved, imperialists within the United States understood the phrase "white man's burden" as a characterization for imperialism that justified the policy as a noble enterprise.

I could be wrong, but I believe it's a quasi-racist/imperialistic ideology that states that it is the duty of the white man to take over the world and conquer other races for their own good, I guess. It's a pretty harsh ideology that springs from the need to justify and glorify slavery and imperialism.

As far as the Shining goes, I believe that this is Jack's attempt to make a clever joke, but I think it kind of falls flat. I think he's being sarcastic, but it's hard to tell given that his mindset is distorted by hallucinations.

I could be totally off, but I've thought about this line a few times, and I can't seem to come up with a greater meaning than a bad joke that shows us how Jack wants to be perceived.

Not the answer you're looking for? Browse other questions tagged movie horror stephen-king the-shining or ask your own question.

6
What does Gandalf say To Galadriel in the Hobbit trailer?
1
Did Jack Torrance get arrested for assault against a minor before he became the caretaker?
7
Why does Gimli say that Galadriel is an “elf witch” who seduces men?
3
Why does Celeborn say that the Enemy knows the Fellowship has entered Lothlorien?
13
Why exactly does Sauron say this to Frodo in the movie?
22
Why did Hagrid say that Snape was one of the protectors of the Philosopher's Stone?
10
Why does King specifically reference Kubrick's “The Shining” in light of his own opinion of it?
6
In the book Pet Semetary, why does Jud Crandall seem younger than his age?
3
Why did Jack Torrance only write “All work and no play makes Jack a dull boy”?