I read a set of sci fi books during the early 1980s. The population were escaping a cataclysmic event using star gate type portals and there was a decline into a galaxy wide interregnum.

story-identification books
Share
Improve this question
edited May 20 at 19:21

In the absence of additional details from the questioner, I'm going to propose Well of Shiuan (1978) by C.J. Cherryh as the book most directly identified. It is the middle book of the original trilogy, coming between Gate of Ivrel (1976) and Fires of Azeroth (1979). All the books were published shortly before 1980, so the trilogy could definitely have been read in the early 1980s.

The overall arc of the trilogy is Morgaine's quest to shut down all the gates between worlds, as seen through the eyes of Nhi Vanye, an exiled native of one of the worlds she is passing through, who joins her at the start of the first book. Most of the worlds have been cut off from one another and within the scope of the story there is no longer any space travel; there is a definite sense that technological civilization is slipping away.

(Not all worlds are like this, or at least they were not within Morgaine's memory, since from her description she started from a fairly technological world with space travel. Certain other people encountered in the stories also have an understanding of technology at least as demonstrated in their manipulation of the gates.)

The gates are powered by "core taps" that draw power from the worlds they are sited on, so they are definitely technological, not magical, constructs.

In the second book in particular, Morgaine and Nhi Vanye (and Chya Roh who opposes them) end up on a world whose land is slowly subsiding into the ocean, and which will shortly become uninhabitable. They do not intend to save the world's population but by each raising a faction of the population against the other they end up with a situation where when they open the gate almost everyone from the world chooses to flee through the gate with them. 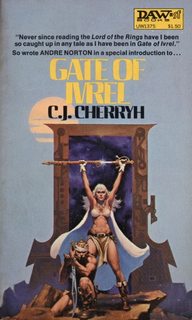 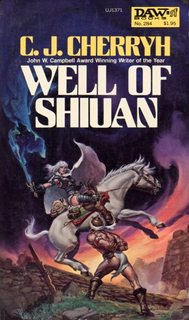 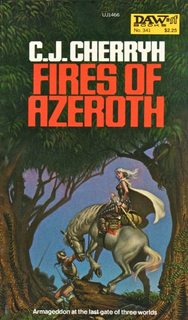