Young adult book series about aliens or hybrids with silver blood. One gains the ability to be a martial arts master. There is a girl who joins and says her blood is like their blood, implying it was red, but they corrected her and showed that her blood was silver. That is all I remember of it.

As the legend goes, an alien landed in the cornfields of Metier, Wisconsin. After a short while most of the aliens left. But others assimilated and cross-bred with humans. These children have lived ordinary lives--until now. At age 13, these offspring will manifest their alien powers . . . and have been targeted for termination. In "Alien Terror", Ethan Rogers used to be a wimp. But suddenly he knows martial arts, wrestling moves, combat skills and even weaponry. He'd think it was pretty cool--if he wasn't running for his life.

Recognized this as the answer to Can anyone help me identify a story about kids with silver blood?

Not a perfect fit but it could be "Red Queen" by Victoria Aveyard.

This is a world divided by blood—red or silver. The Reds are commoners, ruled by a Silver elite in possession of god-like superpowers. And to Mare Barrow, a seventeen-year-old Red girl from the poverty-stricken Stilts, it seems like nothing will ever change. That is until she finds herself working in the Silver Palace. Here, surrounded by the people she hates the most, Mare discovers that, despite her red blood, she possesses a deadly power of her own. One that threatens to destroy the balance of power. Fearful of Mare's potential, the Silvers hide her in plain view, declaring her a long-lost Silver princess, now engaged to a Silver prince. Despite knowing that one misstep would mean her death, Mare works silently to help the Red Guard, a militant resistance group, and bring down the Silver regime. But this is a world of betrayal and lies, and Mare has entered a dangerous dance—Reds against Silvers, prince against prince, and Mare against her own heart. 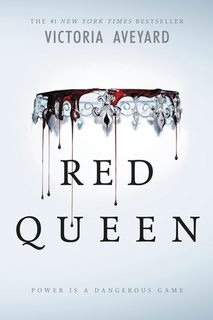 Not the answer you're looking for? Browse other questions tagged story-identification books aliens young-adult or ask your own question.

10
Can anyone help me identify a story about kids with silver blood?