Why did Kylo Ren drag his TIE fighter on the ground?

In The Rise of Skywalker, in a scene first shown in the trailer and taking place on Pasaana in the final film, Kylo makes the strange choice to fly his TIE whisper directly at Rey on the ground: 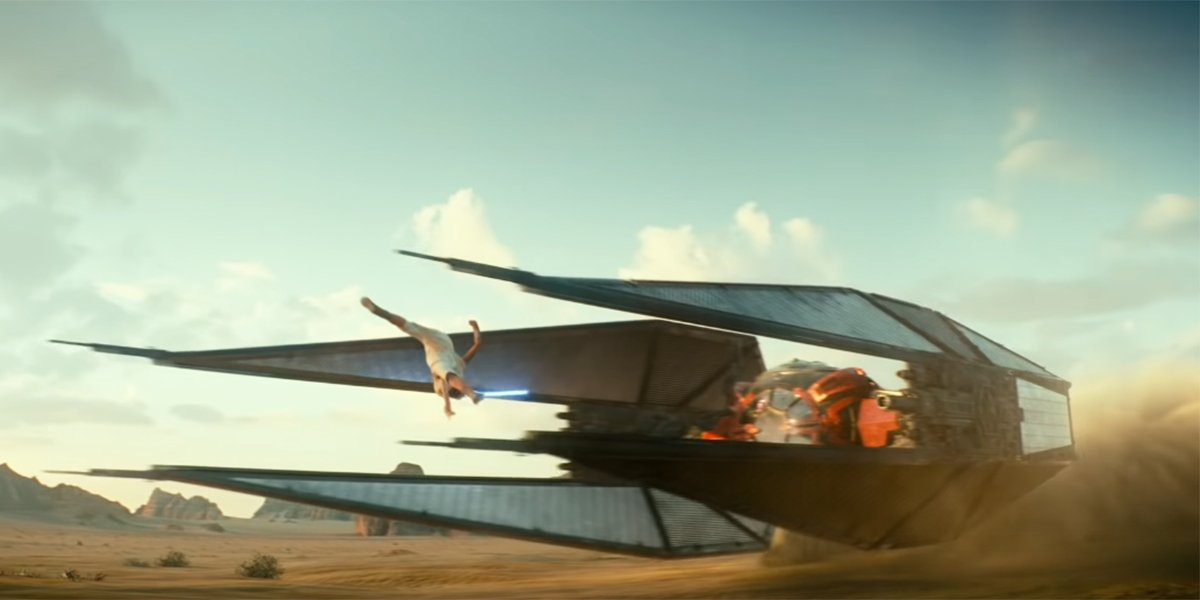 This doesn't seem like it would accomplish any of his goals at this point in the film. If he still wants to recruit Rey, as he reveals later above Kijimi, it doesn't make any sense to try and mow her down with his TIE fighter. Alternatively, if he's trying to kill Rey as commanded by Palpatine, it seems more logical to do so using the ship's weapons, as starfighters are designed to do, as opposed to strafing her at melee range. Sure enough, Rey is able to jump over the ship and slice the wing off, nearly killing Kylo.

Has any official source shed light on his thought process here?

(Inspired by Did Kylo Ren know that Rey would wreck his TIE Fighter?)

star-wars the-rise-of-skywalker kylo-ren
Share
Improve this question
asked May 24 at 16:52

Kylo's plan was to kill (or at least incapacitate) Rey. His thought seems to have been that a low-level attack across the sand would allow him the element of surprise and would cause Rey great anxiety. This would make her an easy target for him on a second run, assuming she somehow survived the ion-wake his ship was causing on the desert floor.

He was mightily surprised when she somehow managed to do a Force jump over the ship, and doubly so when she coordinated this with a lightsaber swing.

Kylo Ren sensed her before he saw her. As he flew his TIE whisper along the flat desert, she was a bright presence in his mind, practically glowing with determination and ferocity. Something odd pulled at his chest. It was the same feeling he’d had when he’d faced his father for the last time, when he’d made the decision to kill Han Solo. You had to kill the past, yes, but you had to kill the light, too, to fully claim the darkness.

He finally understood. Han Solo was his past. But Rey was his light.

That’s why Kylo was still in agony. That’s why he couldn’t shake the memory of his father’s hand against his cheek, of those eyes full of love and understanding. Kylo hadn’t yet destroyed his light.

Maybe the Emperor was right. She needed to die. That, or he needed to kill the light in her.

And there she stood, barely a dot against the ocher sand, her shoulders squared, facing him down. The girl was terrified; he could sense it like he could sense the sweat dampening his gloves. Yet despite her terror, she was unwavering, ready and waiting.

If Rey wanted to survive what came next, she would have to manifest more power than she ever had before. Show him who she was.

Not the answer you're looking for? Browse other questions tagged star-wars the-rise-of-skywalker kylo-ren or ask your own question.

12
How does Kylo Ren recognize FN-2187 by "name" later on?
8
What did Kylo Ren use to ‘drive’ his Force activity?
14
How did Rey get her blaster back?
9
Has anyone else ever flown Sabine's TIE fighter from Star Wars Rebels?
26
Did any non-rebels regularly fly X-Wings?
4
What is the meaning of this character hovering in the last jedi?
16
Which predictions of The Rise of Skywalker: Darths & Droids Bingo were correct?
12
How did Kylo Ren travel to the other planet in the TIE fighter?
12
Why does Kylo Ren repair his helmet?
15
Why did Kylo Ren attack Quinn in this scene?