Book about five people who have magic powers, and at the start and end of each book there was a few pages of comics of stuff that happened in the book

This group of five people have powers, and at the start and end of each book, there were a few pages of comics of stuff that happened in the book.

I know in the first book they are at a school dance possibly and there is a monster or bad guy trying to get them?

The main character has short red hair, and each character has a power of the element (i.e. earth, water, fire, air, can't remember what the fifth one is). At some stage, they find out that their teacher is a monster as well?

At the start of the first book, I know that the redhead main character and her mum move into a new town, and that's where the other four people are.

I feel it's something like M.A.G.I.C or something, but nothing came up when I tried to search it on the internet. I read it a while ago (like four or five years ago) but I think it was published in the 2000s? The title was definitely written like X.X.X.X.X (as in it had dots between each letter).

story-identification novel magic
Share
Improve this question
edited May 28 at 10:10

Will is new to Sheffield Institute, but quickly befriends Irma, Taranee, Cornelia, and Hay Lin, four girls with whom Will learns to share her mysterious supernatural abilities. Together they discover that they need to protect Earth from the evil of Metamoor. But things go seriously wrong for the girls at the school's Halloween dance when Metamoor henchmen crash the party and attempt to capture them. The girls have to command their newly discovered powers in their first battle against evil.

The fifth element is the "Heart" of Kandrakar, wielded by the protagonist Will, which can call the other elements to power. 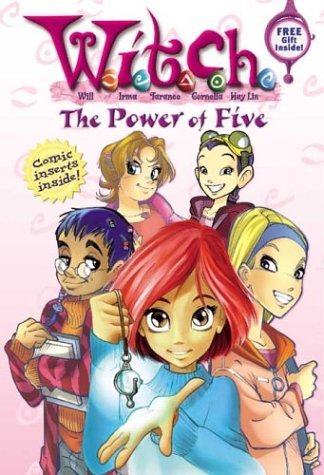 Found by memory, I used to read these when I was a kid.

Not the answer you're looking for? Browse other questions tagged story-identification novel magic or ask your own question.

13
1980s book about a man who glows green, and can use magic based upon how long his mom was in labor?
4
Help Identifying Fantasy Novel About Rune Magic
10
A story including an alien hand in jar in a basement
6
Young Adult Fantasy novel about some boarding school, classmates dying, and passing on?
6
Looking for a book title about control of the four elements
7
Fantastic/sci-fi thriller - journalist investigating disparitions near a factory
3
Book (first in a series?) with a teenage witch attending a school of magic mainly with nonhumans
6
Book in "Where's Waldo" style with 2 kids, 3 book-ish character and characters from other stories
7
YA book series: 4 books each follow a child with a type of elemental magic, who are brought together in the 5th book