How high over the floor/streets is the overhang of rock over Ilirea/Urû'baen?

What the title says. 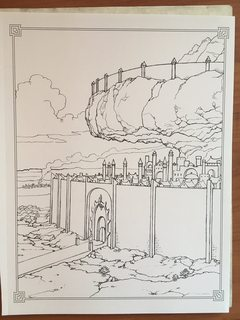 Image of the city from The Official Eragon Colouring Book

Assuming that in the image the scales are a bit exaggerated, how high do the books say that the ceiling of Ilirea is over the level of the streets?

I say that the scales are exaggerated because the wall is suposedly 300 feet tall. That's 100 meters. To picture it better, it's like 33 3-meter-stories high. Also, the pyramid of Cheops is just 30 meters higher.

And the highest estimated wall on Earth has been the wall of the round city of Bagdad (30 meters, 90 feet).

To top it off, there are some roofs of human-built houses (no magic involved + medieval age technology) peeking a bit behind the wall, so unless they are 25 or 30 stories high, the scale is overinflated.

Actually Herodotus wrote that the walls of ancient Babylon were about 300 feet tall, though archaeologists disagre. In real life some medieval secular and religious towers were higher than 300 feet tall.

See my answer to this question:

And see my answer at:

9
How did the Ra'zac know to go to Carvahall?
9
How can Murtagh know the Word?
8
How can Eragon know that the lands in the far east are not inhabited?
7
What did the High Priest do to Solembum or Angela?
1
Why doesn't the Iron Man suit heat up when firing or flying at high speeds?
6
How did Selena kill a dozen men using the word "heal"?
5
How does Nightcrawler's teleportation ability work during high speed movement?
4
How does Miller survive the acceleration in The Expanse?
2
In the books it is said that Urû'baen/Ilirea is placed under a slab of rock. How is it exactly placed?