This is a very long shot as I don't remember too much about this series, as I read it after I had a heavy brain concussion.

The setting was a medieval-time fantasy setting, I'm pretty sure there was magic involved. Each book in the series had a different color stone or pendant on the cover which was associated with a different character.

There were multiple main characters that may or may not have special powers and I feel like they were connected through the pendants/stones.

Also not entirely sure if I remember it correctly, but I think one of the main characters had something to do with noticing/sensing or ending a pregnancy of another main character.

I read it in the early 2000s, bought it in a Dutch bookstore, if that's of any help.

Is this the Deltora Quest series by Emily Rodda...?

It fits the timeframe, and each book in the series has a different-coloured stone on the cover.

Here's the Goodreads synopsis for the first book:

The evil Shadow Lord is plotting to invade Deltora and enslave its people. All that stands against him is the magic Belt of Deltora with its seven gems of great and mysterious power. When the gems are stolen and hidden in dark terrible places throughout the kingdom, the Shadow Lord triumphs, and Deltora is lost.

In secrecy, with only a hand-drawn map to guide them, two unlikely companions set out on a perilous quest. Determined to find the lost gems and rid their land of the tyrant, they struggle towards their first goal - the sinister Forests of Silence. 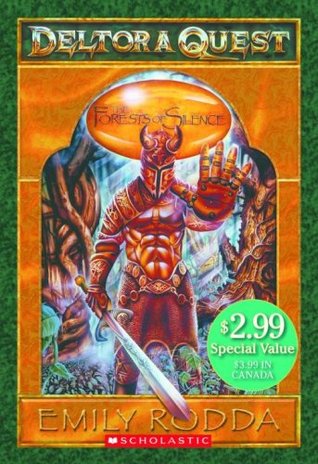 Not the answer you're looking for? Browse other questions tagged story-identification books fantasy-genre or ask your own question.

10
Looking for a fantasy trilogy from the early 2000s
11
Fantasy series with Celtic overtones, intermittent stone magic, and ongoing slow magic
21
Fantasy novel/series with young man who discovers he can use magic that is outlawed
12
Series of Books with a special bow making process
8
Fantasy series with female main character angelspawn