What does the T-1000 hit just before it stabs the T-800 all the way through leading to the alternative power scene?

When the T-1000 hits the T-800, first with a jab with the metal rod, what is it hitting? It sounds like some kind of plate or perhaps its spinal column. How likely is it that it pries open the plate and stabs the central core?

This image (original source) shows an image of the back side of the T800 from T2. 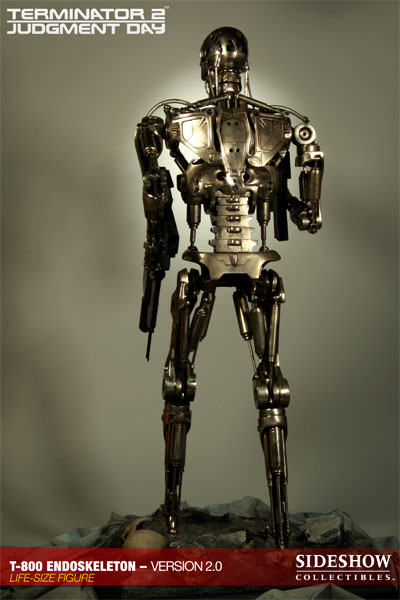 As you can see there are large surfaces here which would verify your suspicions of the T1000 hitting a plate, or going between a shoulder plate and the 'spinal' column plate.

I don't see anything that can be pried open on this image, so it's unlikely that a cover or a panel was removed in the first attack. My suspicion is that his target was the gap between a shoulder plate and the spine. The back-and-forth motions made by the T1000 suggest that there was an attempt to separate a shoulder plate, or widen the gap. This attempt either failed or was abandoned due to ineffectiveness, as evidenced by the second attack piercing straight through the center-line of the T800.

An alternate theory could be made that the first attack was a probing attack. With a metal rod about .75 inches wide, a miscalculation of even half an inch would mean the attack would not be a success. We know that there were different versions of the T-Series being sent back from various timelines, it's possible that this T1000 may have been attempting to confirm some identity by looking for distinctive internal structures that would clue it into which model was protecting the Connors. This information would be useful if critical components were located in different regions of the main chassis.