I read this story in my teens, either as part of secondary school (UK), or from the local library in the late 1990s or early 2000s.

There has been some sort of apocalypse caused by I think a flu like virus that has killed a large number of the population. The story focuses on two girls who are travelling through a city (possibly London).

One girl has been affected mentally by the ordeal and has problems with the situation.

The only real scene I can remember is that the mentally affected girl is wearing a wedding dress and in the middle of the street takes it off and the other girl notices someone in a window twitching the curtains and she believes that they may be undertaking a sexual act, while the girl is undressing.

This is Plague (Published as Plague '99 in the UK) by Jean Ure.

Almost overnight a plague has wiped out the population of England. The only survivors seem to be three very different teenagers. Together they must come to terms with the man-made devastation around them.

Fran, Harriet and Shahid have the power to rebuild society, avoiding mankind's previous mistakes, at the dawn of a new millennium. Do they also have the courage? 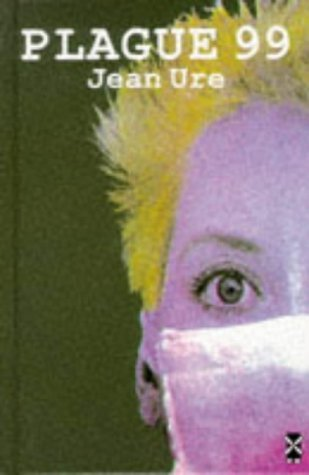 In one scene a character takes an elaborate Victorian dress off in the middle of the street.

There wasn’t anyone about, so it didn’t really matter that she stood stark naked, save for a pair of underpants, on the edge of Streatham Common. It just confirmed her general loopiness. Fran glanced across at Shahid and smiled, rather nervously. Shahid hunched his shoulders. Let her get on with it. Across the street, just for an instant, he thought he saw a face at an upstairs window. Someone enjoying a good perve, no doubt. Well, and why not? There wasn’t much else to enjoy, these days.

13
Novel series with a half-cyborg hero with two left arms
6
Identify fantasy story with magical boy, girl who marries a prince who is assassinated
7
YA novel about boys travelling to post-apocalypse future
25
Novel about rendezvous with alien ship travelling through the solar system
6
Dystopian novel, main female character escapes a which factory marks girls with numbers
3
90s(?) cartoon series with two girls, one with pink hair
33
A fantasy novel under London