India doesn’t have a strong Sci-Fi history. Here are some examples of Indian works which featured aliens:

To set a mark for written science fiction, I'll suggest Shukra Bhraman ("Travel to Venus") by Jagadananda Roy, written in 1892 and published in 1914. According to Indian Science Fiction: Pattern, History and Hybridity by Suparno Banerjee, it "describes an adventure on Venus and encounters with alien creatures". 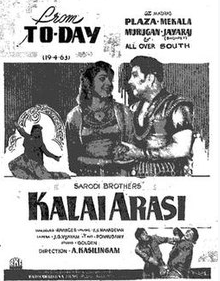 Its main plot was about aliens abducting a dancer so that she could teach the aliens how to dance and sing.

I'll try finding other Indian media featuring sci-fi but as far as movies go this was the first.

Not the answer you're looking for? Browse other questions tagged aliens history-of or ask your own question.