Are midi-chlorians still canon, despite not being mentioned since Episode 1?

I’m not sure what the current status of midi-chlorians are in the canon hierarchy.

They are mentioned in The Phantom Menace and never again in canon that I’m aware of. Additionally, I seemed to recall there was a significant backlash from fans at the time at the mere concept.

Other than not being mentioned ever again, I’m not aware of any retcon on the concept. So, what is the current canon status of the midi-chlorian?

Midi-chlorians are fully canon. They exist in the Star Wars universe and have been mentioned in a wealth of other canon works including;

Star Wars: Revenge of the Sith

“According to the legend,” Palpatine said, “he could directly influence the midi-chlorians to create life; with such knowledge, to maintain life in someone already living would seem a small matter, don’t you agree?”

Revenge of the Sith: Official Novelisation

I want to check his midi-chlorian count.

All energy from the Living Force... from all things that have ever lived, feeds into the Cosmic Force, binding everything and communicating to us through the midi-chlorians.

Despite promising effects, the body rejected the blood. Pershing doubts that they would find another donor with as high of an M-count, referring to midi-chlorians.

A Force-sensitive individual is able to tap into the Force and learns its will due to midi-chlorians: microscopic, intelligent life-forms that communicate the will of the Force. They reside within the cells of all living organisms and form a symbiotic relationship with their hosts. Without midi-chlorians, life would not exist and the universe would have no knowledge of the Force. 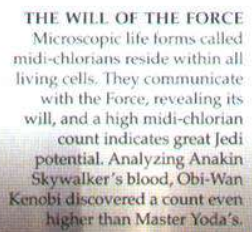 Star Wars: Absolutely Everything You Need to Know, Updated and Expanded

A: Midi-chlorians are tiny, intelligent life-forms that live inside the cells of all living things in the galaxy. They do no harm, and help their host use the Force. The more midi-chlorians someone has, the more powerful a Jedi they may become. 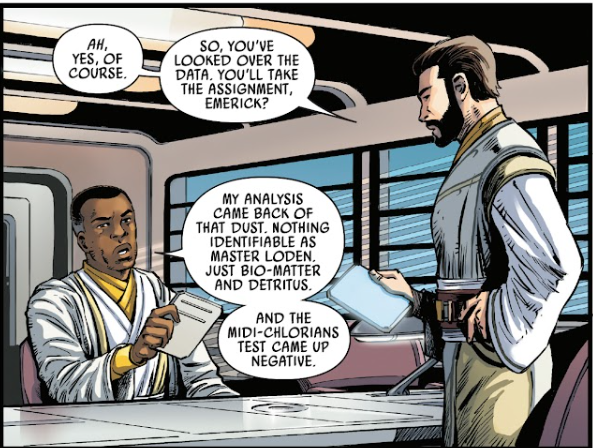 The High Republic: Trail of Shadows #1

Various articles in the Official Databank

But all traditions agree that life creates the Force and makes it grow. Individuals’ Force potential depends on their levels of midi-chlorians, microscopic life-forms found within living cells. The Jedi believed midi-chlorians communicated the will of the Force, which could be understood through meditation.

And used as recently as June 2022 in What a Jedi Makes, from the canon anthology Stories of Jedi and Sith

“Blood tests. They have my midi-chlorian count.” The boy pulled out a flimsi from his rags. During his research, he’d discovered that the Jedi often examined a candidate’s blood for microscopic organisms they called midi-chlorians. The greater the number, the stronger a candidate’s suitability to join the Order. Anticipating the Jedi would request a count, the boy had paid an Ortolan bloodletter to perform a test. He proudly pointed out the results to the girl. “As you can see, my count is high.”

While midi-chlorians have not really been name-checked explicitly since the prequels, The Mandalorian had an "M-count" mentioned by Dr. Pershing that is likely regarding midi-chlorians.

One of the phrases Pershing uses is "M-count," describing the properties of the Child's blood. We know by now that Baby Yoda is not only Force-sensitive, but an extremely powerful wielder of the Force. Obviously, this "M-count" can only be a reference to midi-chlorians, the microscopic entities present in the blood of Jedi that were invented pretty much exclusively for the weird pseudoscience of the Star Wars prequels.

FWIW, George Lucas claims that his planned sequel trilogy would have made them more prominent.

George Lucas had long considered making the Star Wars sequel trilogy, and he was particularly interested in exploring the science of the Force - and particularly midi-chlorians. "[My sequel films] were going to get into the microbiotic world," Lucas explained in one interview with James Cameron back in 2018. He was especially interested in a race called the Whills, who have been referenced throughout Star Wars history but have never been explained. "The Whills are the ones who actually control the universe," Lucas continued. "Back in the day, I used to say ultimately what this means is we were just cars, vehicles, for the Whills to travel around in... We're vessels for them. And the conduit is the midi-chlorians. The midi-chlorians are the ones that communicate with the Whills. The Whills, in a general sense, they are the Force." No doubt George Lucas' ideal sequel trilogy would have been even more controversial than Disney's, because the exploration of this microbiotic world would have been felt to remove a great deal of the sense of mystery and spirituality of the Force.

Yes, they are still canon. Other notable appearances include Star Wars: The Clone Wars and Revenge of the Sith.

All that surrounds us is the foundation of life, the birthplace of what your science calls midi-chlorians, the foundation of what connects the Living Force and the Cosmic Force. - The Force Priestesses, "Destiny," Star Wars: The Clone Wars

Darth Plagueis was a Dark Lord of the Sith so powerful and so wise, he could use the Force to influence the midi-chlorians to create… life. - Palpatine, Revenge of the Sith

Here is a complete list of their canon mentions:

While subsequent works generally do not stress them as much as The Phantom Menace, they were never decanonized and continue to receive occasional mentions to this day.

Not the answer you're looking for? Browse other questions tagged star-wars midichlorians or ask your own question.

14
Does the fact that Yuuzhan Vong are not linked to the force contradict our knowledge of the connection of Force to life?
83
When Did George Lucas make up the stuff about the Sith and Midi-chlorians?
7
What is the canonical range of speed a podracer might achieve?
21
Are there animals that can use the Force?
15
What does a midi-chlorian look like?
8
Why does the Force do the bidding of the Jedi and Sith?
25
What Happened to Jedi Masters Yaddle and Yarael Poof?
42
What exactly are the Jedi measuring in the Phantom Menace?
2
Were there EU prequels before canon?