How does Thor's flight work exactly?

As we see during the movies Thor and The Avengers, Thor is capable of pseudo-flight when he has the use of Mjolnir. When he is without his trusty hammer, he can certainly use his increased agility and strength to leap great distances, but we have not seen him fly unaided.

When he flies with Mjolnir, he appears to spin the hammer to build momentum, and then releases the built momentum to throw himself extreme distances. Is that part of Mjolnir's magic? If it were a matter of the hammer's weight, merely spinning it should throw Thor around. Does Mjolnir only gain mass when Thor intends it to? Or is there other magic at work here?

How exactly does Mjolnir allow Thor to fly?

I'm okay with answers based on the MCU or any mainstream canonical Thor comics (for instance, most "What-If's" are widely considered to be extracanonical).

If you are seeking a purely physical reason for Thor's ability to fly, there isn't one. Thor's flight is inconsistently presented and has been so for his entire career. While the mechanism appears to be the whirling throw and release, this mechanism cannot explain the inconsistency in his ability to fly. 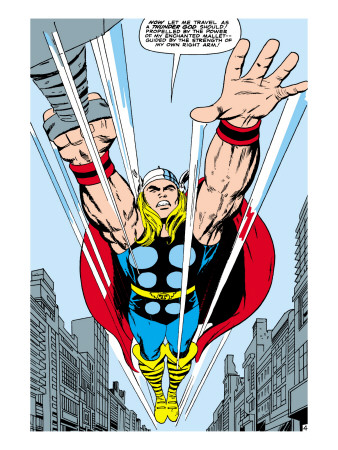 There is no physical explanation capable of explaining it. Thor's flight is purely a magical effect. Depending on the writer, Thor's ability to fly was either:

Neither of these has ever portrayed his method of flight accurately since:

Perhaps the best answer to this question can be found in this panel: 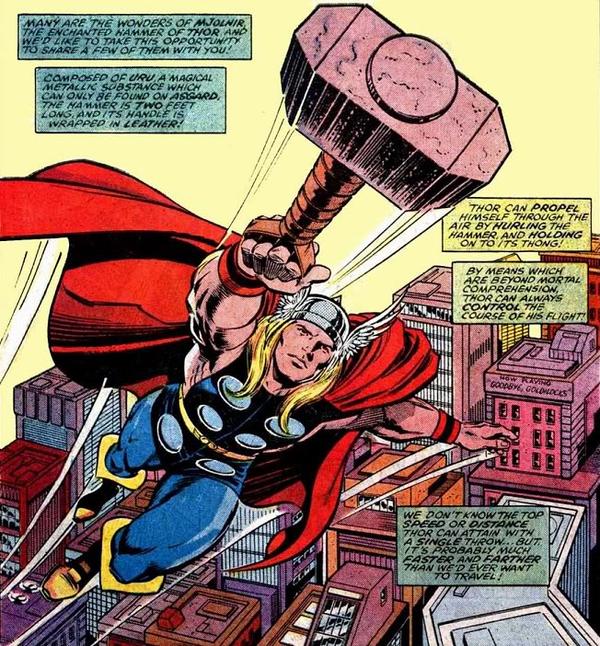 He appears to spin the hammer to build momentum, and then releases the built momentum to throw himself extreme distances

The explanation can vary from author to author. Thor used to launch himself by spinning the hammer, releasing it briefly and re-gripping, to give himself that initial propulsion as explained by Stan Lee in this video. (basically your interpretation).

But just this wouldn't give Thor any semblance of a controlled flight. Sachin Shekhar's answer is also incomplete, because we often see Thor flying without spinning his hammer and he's able to finely control his flight path.

The answer is magic. Basically the current explanation is that he wills Mjolnir into flight. From Marvel's official website:

Mjolnir obeys Thor’s commands as though it were alive [...]. Using this command over Mjolnir’s flight path, Thor is able to use the hammer to fly, achieving escape velocities.

It is what it is. After all, you have a hammer capable of magically making itself not liftable by some people, manipulating the weather, inter-dimensional travel, and more. Flight seems relatively realistic in comparison.

In my opinion, if Thor can induce momentum in his hammer to fly to his hand, I think it stands to reason he would be able to induce momentum away from his hands too and if he holds onto it he is taken with it. Just my 2 cents.

The momentum from when Thor spins the hammer is great enough to make him fly, as we see in Thor Ragnarok when Thor channels his powers over thunder and lightning he is capable of flying just by himself

Thor does not induce the hammer to come to him... the hammer seeks him out if it can find where he is, it likely also knows where he wants to go.

In the movies he always whirls the hammer, so that would be the main method of flight for him.

Thor can't fly without it. Most, if not all writers are on board with that. Also Thor isn't a God in Marvel, but an alien and his hammer isn't magic, it's science or advance tech. See his bio.

simplest answer would be that he throws the hammer and holds on. As to how we see the seemingly controlled and changing flight paths: Thor-Odinson or whomever shall be worthy to lift the hammer- is given control over the hammer via a mental connection. Thor can call the hammer to off the ground to his hand and to an large extent control the path it takes while mid-air. Thor does not have to know how to throw a curve ball the hammer just goes flying where he commands it to go-usually the bridge of some unfortunate nose. He throws the hammer in the first place because the rule is HE lifts the hammer, the hammer does not lift him. The hammer can also be spun to create portals to travel great distances in an instant; so his intention of what happens after he spins the hammer is very important. Otherwise he would just be opening portals all the time. In the most recent incarnation of the Thunder God, our female Thor,gives a pretty funny brief description on the whole process. There is a learning curve...[ 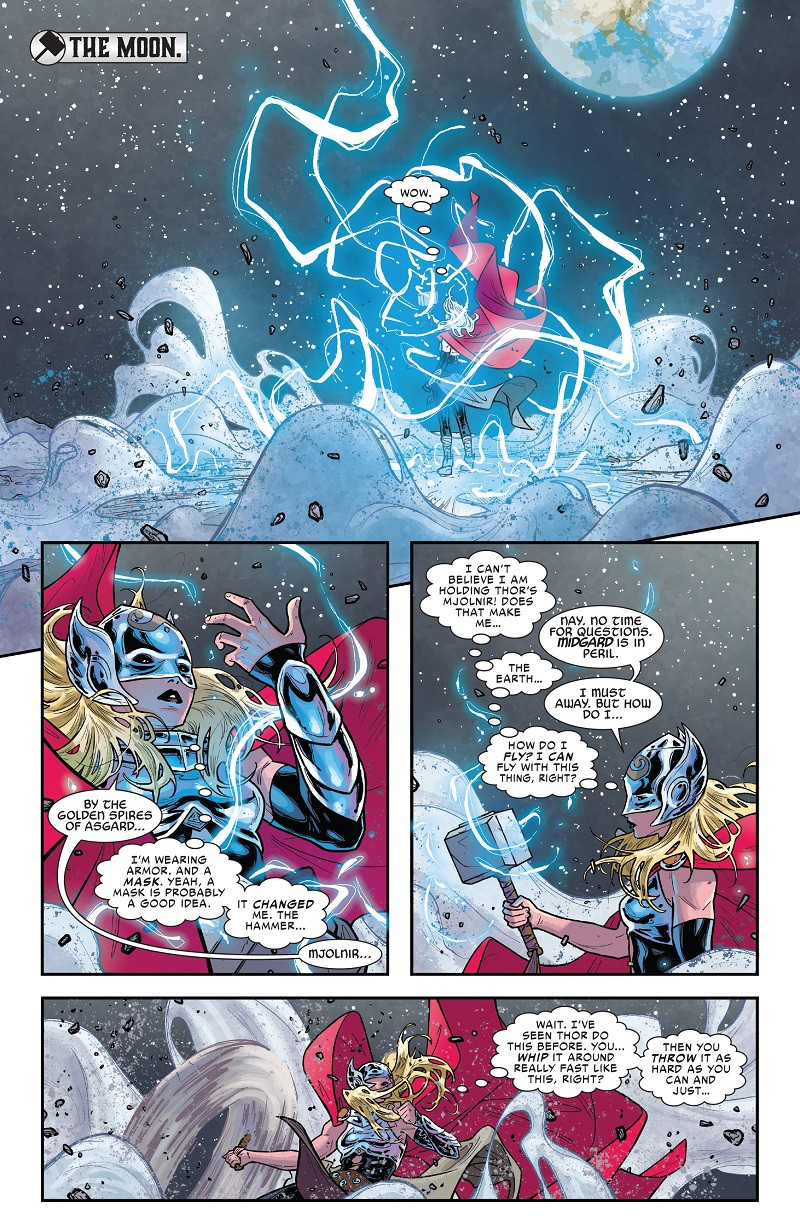 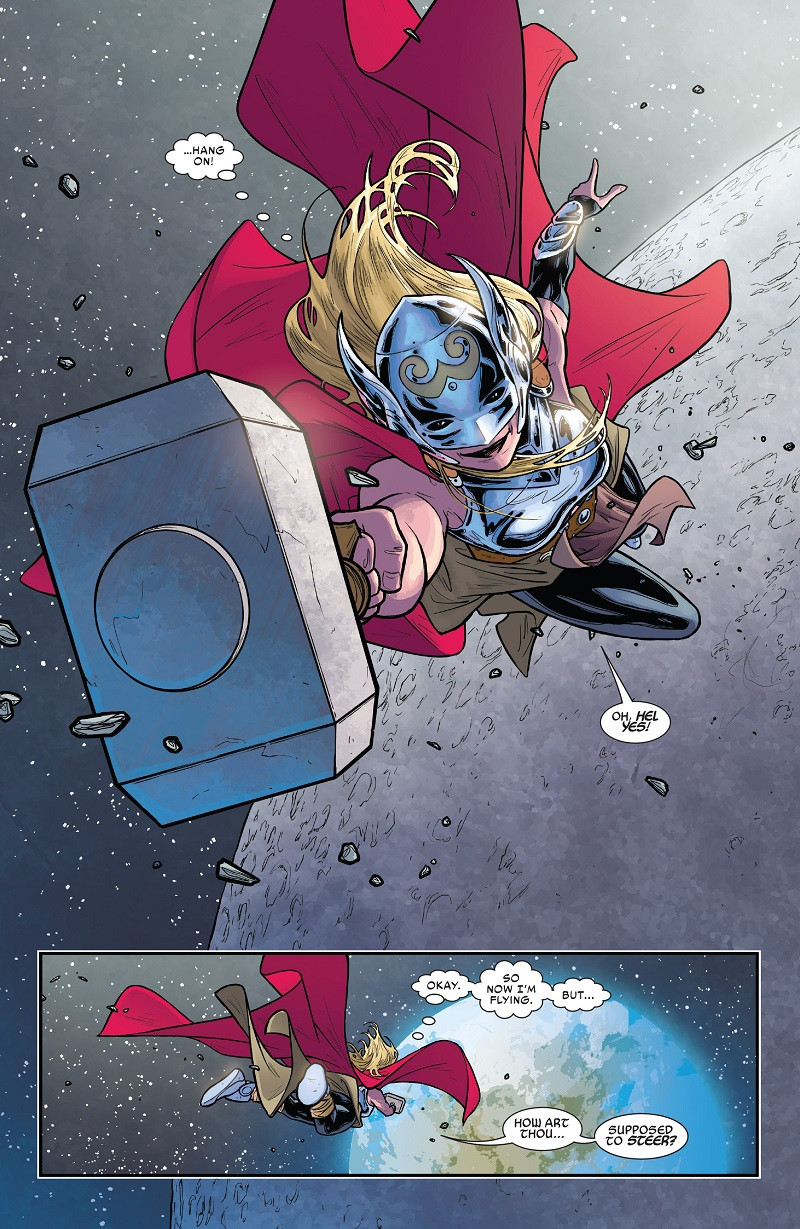 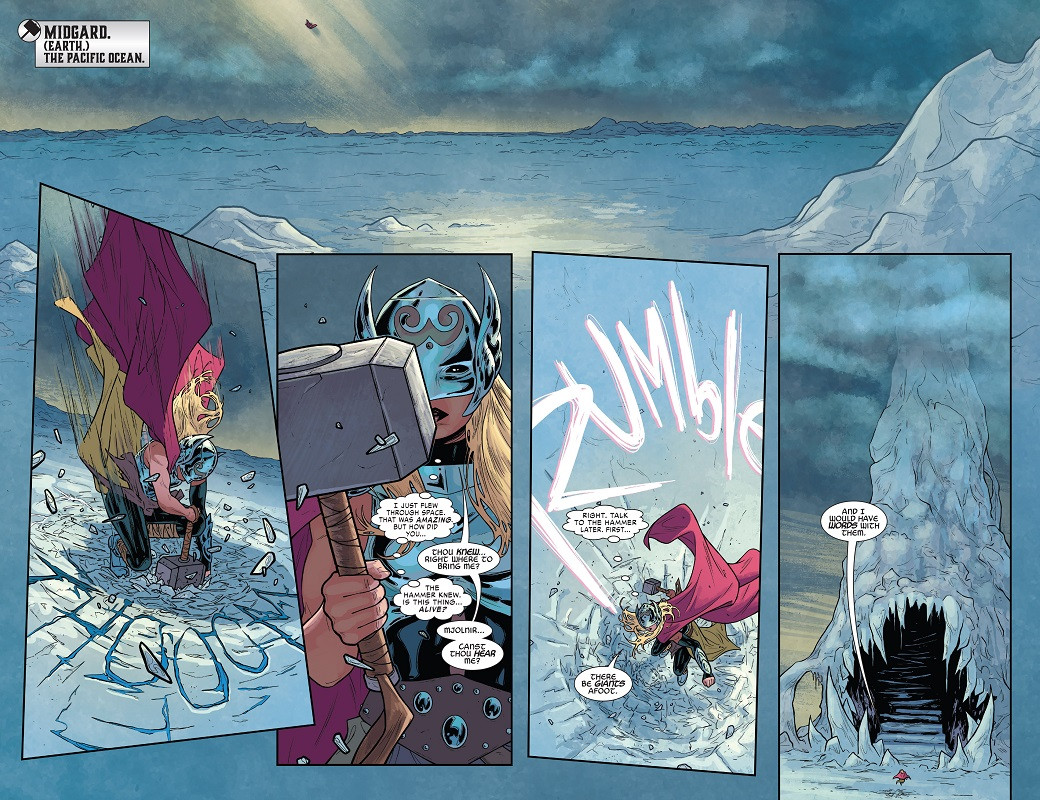 ...it should be noted the very nature of the hammer being extremely picky about the user causes this Thor to question who is wearing the tights in this relationship. I however believe that as time goes by and the wielder proves worthy greater command is given. The hammer is not in complete control of its own actions as this would suggest or its surroundings generally. Case in point would be when Dr.Doom sees Mjolnir flying through Hell(Doom had been stuck there) so he gives chase thus escaping in mjolnir's wake back to Earth-Fantastic Four #536-537 "Hammer Fall". This was when Thor was "dead" after Avengers Disassembled. With Thor being gone the hammer falls/flys thru the realms landing on Midgard. I believe it is in the Road to Civil War tpb.

I gotta comment on anyone wanting to use known, established physics in the Marvel Universe (or DC for that matter) to explain anything. I mean, seriously?? One of the first things you learn in Physics is every action has an equal an opposite reaction. Since almost all of the superheros use enormous forces, and almost none of them ever deal with any "opposite reaction" then these scenarios are fantasies. Magic is the only explanation for why someone can hit Superman or Thor or have Daredevil run up a wall or ... and have the momentum, energy and force just disappear. It is a violation of the Conservation of Energy, conservation of momentum and often conservation of mass, and is just a way to avoid real world consequences (ie reality). What I feel is the worst examples of this nonsense is when superhero 1 takes a enormous hit (or lifts or catches an enormous mass) and his/her feet keep on the ground. In a real scenario, even if the legs and feet were "unbreakable" the dirt/pavement beneath them is not. It WOULD break and the character WOULD be moved (along with what could be quite a crater, not even counting effects on near-by structures). And don't get me started with heating effects... Anyway, if you want the action in MU or DCU to be 'consistent' you must remain ignorant of our known physics, because in a world magic exists, surely the dinosaurs would have avoided extinction by chanting around a campfire, and we would not be here.

been reading through this sequence of posts, and only know the Marvel movie universe to draw upon for answers or theories for an answer. I do not believe swinging or rotating Thor's Hammer has anything to do with his ability to fly. Reason being in the first Thor movie he used the hammer in a rotary fashion to whip up a cyclone, then he flew up inside it, then hovered still, while increasing the cyclones vortex. This in turn made the destroyer rise off the ground into the vortex with him where he was able to destroy it. Surely this suggests if he can increase the cyclone and not have it effect his flight but effect the destroyer to rise, the swinging of the hammer had nothing to do with his flight. The rotation of the hammer may be more like in the Olympic sport of hammer throw, in terms of power rotation is needed to build it up the magic/powers he is endowed with. In Thor the dark world, Thor is quoted to state "out of the two of us which one of us can actually fly" suggesting he is capable of flight but that has yet to be shown on screen. Thor when receiving the powers of Thor and in full Thor attire is adorned with versions of the 9 realms which he protects and a cape. This to me suggests a potential physical change in his abilities and are powered by the combination of the worlds and his cape.

At least in the MCU. It's pretty clear that he isn't flying so much as his hammer is and he is just piggybacking on Mjolnir's self-propulsion.

We can see this clearly in Ragnorok where Thor is able to mentally command the hammer to spin around him to take out Fire Demons. He's basically doing the same thing, only with him hanging on to the hammer acting as a backseat driver mentally directing where Mjolnir flies.

When he flies with Mjolnir, he appears to spin the hammer to build momentum, and then releases the built momentum to throw himself extreme distances.

This can't be the case: it'd be something like you pushing a car from inside to propel yourself.

One plausible explanation: by spinning the hammer/Mjolnir, Thor creates a huge pressure difference (aerodynamic "lift" force) like a helicopter does. The explanation isn't valid for empty outer space, but it was never shown in the movies. We did see spinning hammer/Mjolnir actions only in the atmosphere.

Update:
Sorry for that epic fail sentence. I did forget about the magic, but even with the magic, that physics doesn't look good.

A simple explanation: Mjolnir obeys Thor (that's why it came from thousands of miles when he raise his hand to summon it). To fly, all he need is to command Mjolnir.

16
Why don't Thor's goats appear in the MCU?

18
How does Loki's staff work?
26
How much would Thor's hammer (Mjolnir) weigh?
40
How much of Thor's power could Rogue steal?
15
How does Captain America's Shield harness work?
11
How does the superpower distribution of Asgardians work?
2
How is Thor's hammer imprinted?