What does the phrase "fully fueled, in gander" from the Superman story "City Under Siege" mean?

When I was a child, we had a LP record with four Superman stories. 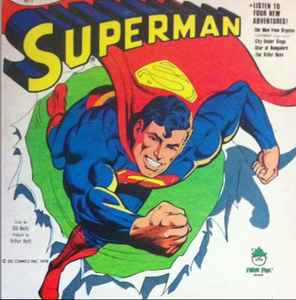 My favorite was "City Under Siege," about a group of terrorists who threaten Metropolis with a homemade nuclear weapon. (The was also released as a 45-rpm single, with an attached comic in the album, but we didn't have that.)

The story seemed rather sophisticated, at least compared to typical media for young children. It describes nuclear bomb sizes measured in "kilotons," talks about Superman's flight approaching the speed of light, and mentions radioactive tracers used in hospitals. (That was the first time I, as a child, had ever heard of radioactive tracers for medical imaging.)

However, there was one bit of terminology that confused me as a kid, and I still don't know what it means. Here's the panel from the comic version of the story. 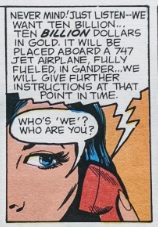 Lois Lane gets a call (staring at about 2:45 in the YouTube recording) from the leader of the terrorists, Trask, who tells her

We want ten billion... ten billion dollars in gold. It will be placed aboard a 747 jet airplane, fully fueled, in gander.

So what does "in gander" mean? As a child, I hypothesized that it might refer to some kind of aviation fuel, or to some location at the airport (presumably for easy takeoff). However, so far as I know, neither of these is correct. The meaning of "in gander" is still a mystery.

I have searched for an answer online several times, but I have never located anything satisfactory. However, I did just uncover a connection between the airport in Gander, Newfoundland and early experiments with in-flight refueling. This reference doesn't make any sense in the context of the Superman story, although it is at least related to the topic of aviation fuel. So the writer of that story may have misunderstood the meaning of "fueled in Gander" and inserted the phrase nonsensically into the story.

However, is there some other explanation of the "in gander" terminology that does make sense.

Gander is, as mentioned in comments, a place — Gander Airport, in Gander, Newfoundland, near Gander Bay.

Airliners used to be slower and have quite a bit less range, so long-distance flights would make one or more stops for refueling. Gander was one of those refueling stops — as one of the easternmost points in Canada, it's about as close to Europe as you can get and still be this side of the Atlantic. A fully-fueled jet on the runway in Gander, therefore, is "ready to go anywhere". And an airplane flying across the ocean is out of sight of ground-control radar (still largely true even today), so who knows where it's going to show up?

That said, the concept is a little behind the times for when it was written. The original-model 747 had an 8,500km range — enough to get basically anywhere in Europe from anywhere in the Eastern half of the US. The 747-200, in service by 1972, extended that to 12,000km (or even more if the plane was nearly empty, as Zeiss Ikon points out). The writer was probably used to older jets and hadn't really absorbed that fact.

30
How does Bruce travel from The Pit to Gotham City?
11
What does the Indigo Tribe oath mean?
3
What did Adventures of Superman use from the comics and what was later added from the series?
6
What does Superman have to do to maintain Kandor's vitality while he searches for a way to restore the city?
6
When Superman bleeds, does that mean he is killing the Kryptonian race?
16
What does this line mean in the Watchmen movie?
46
What does Superman do with his regular clothes after changing in the phone booth?
9
What does the circular symbol mean that is worn by many men of the House of El?
10
What does the inscription on Wonder Woman's shield mean?
5
Superman vs. The Cyclotronic Man; what was the story arc?