Book about children who can't see shapes or color

Maybe the title of my question is off but anyway, I remember back in highschool of the year 2004 and read a strange book about a futuristic society. That society had children raised and taught in a weird way, if I'm not mistaken they were unable to see in color just like black white and grey, and shapes were odd to them as well, some of these kids later escaped this place and they were being hunted

This may be Lois Lowry's The Giver 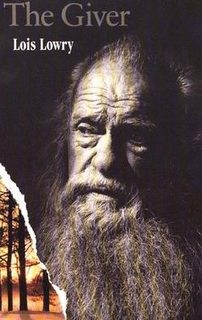 The Giver is a 1993 American young adult dystopian novel written by Lois Lowry. It is set in a society which at first appears to be utopian but is revealed to be dystopian as the story progresses. The novel follows a 12-year-old boy named Jonas. The society has taken away pain and strife by converting to "Sameness", a plan that has also eradicated emotional depth from their lives. Jonas is selected to inherit the position of Receiver of Memory, the person who stores all the past memories of the time before Sameness, as there may be times where one must draw upon the wisdom gained from history to aid the community's decision making. Jonas struggles with concepts of all the new emotions and things introduced to him: whether they are inherently good, evil, or in between, and whether it is even possible to have one without the other. The Community lacks any color, memory, climate, or terrain, all in an effort to preserve structure, order, and a true sense of equality beyond personal individuality.

11
Can someone identify this book, where children are bred for specific jobs?

23
What is the title of this old interstellar travel guide?
4
Comic - woman in dystopian world
14
YA scifi novel where handedness is referred to as north and south instead of left and right
9
Book about a magic wizard who can see the color of emotions
5
90s/2000s European(?) movie: alien/machine soccer ball that helps kids
10
Sci fi film similar to Village of the Damned
8
Strange late '90s/early 2000's SF TV movie/episode