Manga about two girls who get reincarnated to another world; one marries a prince while the other marries a blue-haired knight

The story is in black and white and reads from right to left. On the cover of the manga, there is a black haired girl and a blue-haired man who are the main characters of the manga. I think the girl was wearing a pink dress on the cover.

This is That Time When I Was a Side Character in a Magical Journey. 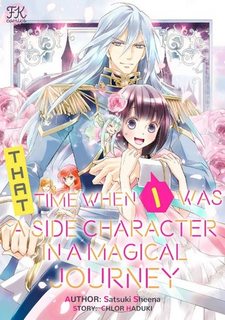 Transported to a kingdom in another world with her friend, Michiru finds herself in the care of the handsome knight, Cainlotte. His demeanor is as cold as ice... But it turns out he's embarrassingly sweet to the point of being overprotective! Will there be a limit to her big-brotherly knight's fawning!? Find out in the long-awaited comicalization of this romantic comedy about an everyday girl who was just in the wrong place at the right time!

Michiru and her friend, Maki, are transported from Japan to the world of Estelia by a magic stone Maki bought in a shop. In Estelia, Maki is courted by a prince while Michiru is placed in the care of a blue-haired knight named Cainlotte. Michiru is subsequently told that she was fated to die in a car accident the day she was transported to Estelia, but the spirits of the stones in Japan asked the magic stone to save her.

The pages in the manga read from right to left, and the cover shows Michiru wearing a pink dress and standing in front of Cainlotte. 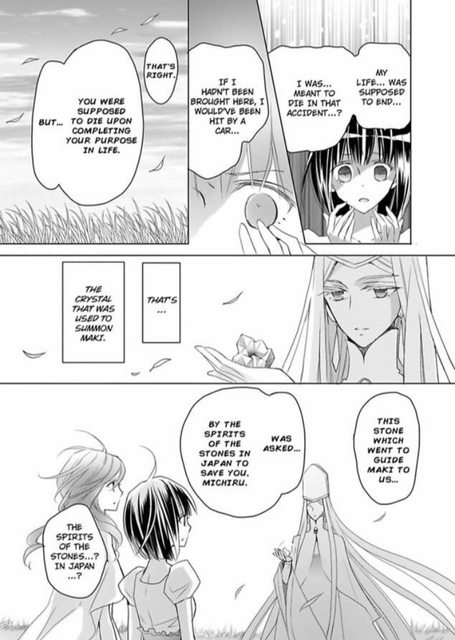 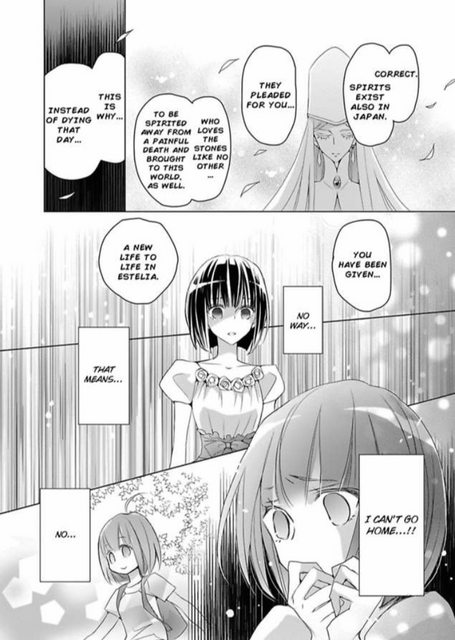 6
Fantasy book, YA, Girl with magical powers & tattoos
5
Mecha anime where 2 girls fight with mechas
8
Cartoon in a world with magic stones wielded by four children which combine to become stronger, and can summon creatures
6
Manga with main character waking up in a different world to see a girl pursued by a butcher wielding a gun with a parasite in it
3
Manga with a lying reincarnated child main character
4
Manga about a noble girl who's banished by her parents and school, then later dies, goes back in time, and experiences similar events again
4
Cultivation manga where the main character is killed by poison before his marriage and reincarnates in another world, where he gets a healing item
7
A powerful mage gets reincarnated as the youngest prince who's overpowered from birth
3
Manga/manhwa about a female lead who is reincarnated/reborn as a magician, then exiled to a snowy territory
4
Main character reincarnated in a forest and fights a giant ant-like creature, saved by a mysterious girl