Looking for a sci-fi book with lot of mechs

I read it about 2013-14, and it was a hardback book with two robots and a kid on a ‘skateboard’ that could fly. Printed in english with no illustrations I can remember inside the book.

If it's possible you're off by a few years, this sounds very much like Diego and the Rangers of the Vastlantic (2017) by Armand Baltazar. The cover depicts the hero on a flying board and a giant robot: 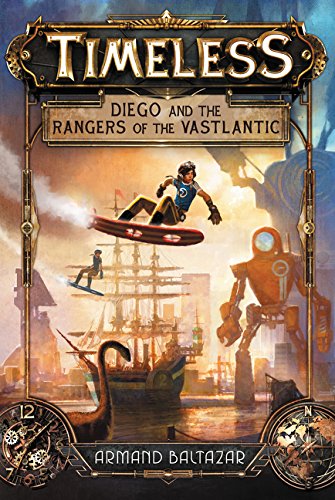 Snippets of reviews on Goodreads show many matches to your points:

13 year old Diego and his friends are the first generation to be born into the world after the Time Collision, when continents and times collided. Now things have settled enough, but not entirely; people still identify themselves as from one of three major time periods, and dinosaurs roam the oceans and wild lands. The present is full of tech from multiple eras, and Diego's father is a genius engineer who (among other things) builds robots. Diego has his abilities--including a mystic ability that allows him to make almost any repair--but isn't sure he wants the same life. His mother was a hotshot pilot in the wars that broke out after the Collision, and Diego's more interested in flying. Then Diego's father is kidnapped by a group that wants to reverse the Time Collision (which will wreak havoc on the current timeline), and Diego and three other 13-14 year olds accidentally end up on the rescue mission--led by the pirates paid for the job.

Another notes Diego has the Maker's Sight:

On his thirteenth birthday, Diego learns from his father that special abilities called "The Maker's Sight" run in their family, which grant them the skill of visualizing the design and creation of objects within their mind, talents that Diego's father also possesses.

(Note that the editions listed on ISFDb were all illustrated, so yours may have had different cover art.)

7
Looking for the title of a book from about 1980-81 that showed a history timeline of the future
6
Short Story collection about monsters
4
Online fantasy story about puzzles and a girl who remembers the future but not the past
9
Looking for a YA fantasy novel about a magical tutor who spends the summer with two English kids
3
Genie show involving Magic and such
7
Anime/cartoon with kids battling with robots in a game
5
90s anime with a kid running away in a sewer with his two-headed dog, Cerberus
7
Looking for a specific short horror anthology book found in Canada/early 2000's/black cover/artwork inside