Novelette or short story: Aliens resurrect female after humanity has died off [duplicate]

Last story in a book of short stories. Written by a man, other stories were by different authors.

All human life on Earth had died off. An alien race with the ability to bring the entire human race back to life, brings one female human back to life to fight for humanity. Trouble is she's not so fond of humans, either!

Most of her time in the book is spent breeding animals and living. The aliens say she has three tries to convince them to revive humans. She offers them worship, the entire wealth of the planet but it's not enough. The third offer comes when she's dying a second time and tells the alien she's been communicating with to bring back the race that they had loved and lost, who guided and taught them and had died in a war to protect this alien's race from extinction.

This convinces the aliens to bring humans back and the aliens are reunited with their beloved mentors.

This is almost undoubtedly "Can These Bones Live?" (1979) by Ted Reynolds, anthologized in a trio of best-of-Analog anthologies with identical content but different titles. The most likely one, based on your description, is The Analog Anthology #1 (1980). 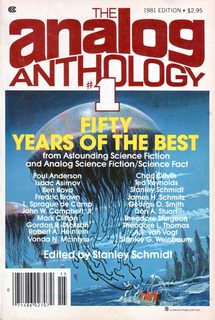 The story is indeed the last one in this anthology and the cover art is in blue and grey.

The unnamed protagonist wakes on a deserted future Earth. The Roanei appear to her in dreams, and explain they have brought her back, as they always bring back one of every dead intelligent species they find:

Do you really want it back the way it was, ask the lunar rocks in their barren silent idiom.

It's not clear why you'd want the whole race back, blazes the sun, shining down eternally, up top left center, but you can always ask; not promising any reply.

Ask once only, that is, tinkle the constellations, strewn endlessly across forever. It is tedious to consider invalid requests. One individual per species is usually quite sufficient.

And the Earth, silent blossom, silently whispers, be very sure before you ask. Cannot unwish wishes once wished. Remember...

She's not really all that convinced that humanity needs to come back:

Not, she had to admit to herself, that she’d ever been a true mankind enthusiast. She’d liked some people, sure.

It's not she that asks for mankind to be restored; in dreams she is shown the request of other delegates of their races asking for restoration:

She knows, in her dream that she sees the last, the resurrected specimen of the Mnestepoi. He is making his great pitch to the Roanei, and is he laying it on strong! Power he offers, in all four hands, and knowledge unimagined, and riches untold. It is a bit hard to follow, because it is full of concepts she can’t quite get her mind around, but the idea that the Mnestepoi hold the riches of all yearning, the knowledge of all ages, the powers of the universe, comes through loud and clear. And all these will be for the Roanei alone, if they’ll only bring the rest of the Mnestepoi back to life.

But each is rebuffed:

"What would we want with power, you call it, with riches, with knowledge? These mean nothing to us. We do not comprehend the value you put on these things, nor do we care. The answer to your request is no."

The Coronolee offer their art, but the Roanei don't want it.

The Toomeer sacrificed themselves that the Roanei might live, but the Roanei didn't value that enough to bring them back.

She asks to dream of those who have been resurrected, and her dream is empty; there are none.

She gives up on the Roanei, decides they are sadists, and instead turns to simply living and raising animals and grows old:

She had traveled long, and then settled long, developed a Spot that was particularly hers in a world that was all hers in general, showed elderly crotchets to her line of squirabbits, forgot at times who and where she was.

She is forewarned that her death is imminent, so she decides she will talk to them after all:

She did not think the Roanei ever granted wishes.

But if she could get only one wish, she would wish big.

She thought, her withered cheeks wet with her last tears, "Roanei, I wish for the rebirth of the Toomeer, they who gave themselves to death that you yourselves might live."

The Roanei grant this wish, and bring back the Toomeer. But the Toomeer have found a place where they are happy, and rather than come back they wish that the Roanei would join them. And as a final request, the Toomeer ask the Roanei to bring back humanity:

"WE HAVE NO WISH NOR NEED TO RETURN," boomed out the voice, awesome beyond belief and yet more human than she had ever heard from the lips of men. "FOR CYCLES WE HAVE BEEN CONTENT TO REMAIN FAR BEYOND YOUR VIEW. EVER SINCE THE EVENT YOU PRESUMED OUR ANNIHILATION WE FOUND THAT THE VALUES WE HAD HELD FOR THEIR OWN SAKE WERE NOT AS EPHEMERAL AS WE HAD FEARED, FOR THEY ARE CHERISHED IN A REALITY YOU HAVE NOT YET GLIMPSED. WE OURSELVES WERE SURPRISED."

The thunder softened to an organ richness.

"WE HAVE LONG WISHED YOU TO JOIN US, ROANEI, BUT UNTIL YOU RECOGNIZED THE NEED, WE COULD NEITHER REACH NOR INSTRUCT YOU. WHAT YOU HAVE THIS DAY FOUND LACKING WITHIN YOU, WE CAN TEACH YOU TO POSSESS. WE CALL YOU TO US. WILL YOU COME?"

As the dwarf nodded, tears funneled the gnomish face.

"AND BRING BACK THIS RACE," continued the words on the wind. "“WE ARE GRATEFUL TO IT, GIVE IT YOUR POWERS AS WELL. PERHAPS THEY MAY DO SOMEWHAT WITH THEM."