Where is this logo seen in the Witcher franchise? 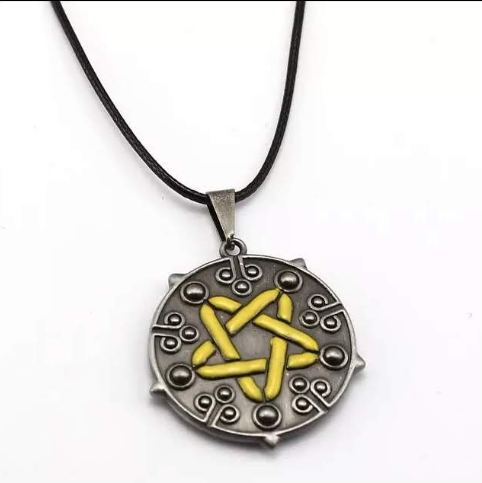 I found this necklace online which says it's from the Witcher franchise.

Could someone verify where exactly was this logo portrayed in the games?

Yennefer wears a necklace with that interlaced star in Witcher 3: The Wild Hunt. 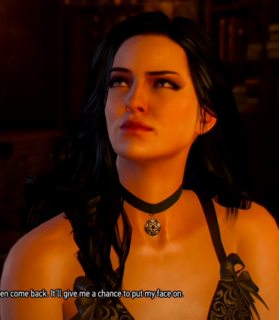 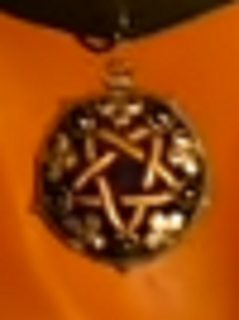 The version that appears on the book covers is more like a classic pentagram. 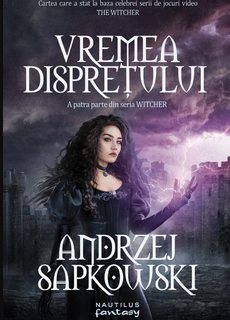 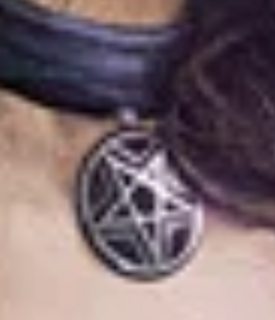 This emblem looks similar to what was displayed in The Witcher 3, however, this is inaccurate.

The point is that Yennefer owned "the obsidian star on a velvet ribbon" ("The time of contempt" book by Andrzej Sapkowski, chapter 3; note also another ribbon here), which was black and white, and had no yellow colours in that.

Another quote from that book: "He looked at Yennefer walking alongside him, at white-and-black-and-diamond Yennefer, with her raven hair and violet eyes".

‘You have my undivided attention,’ Yennefer said, touching the obsidian star hanging from its velvet ribbon. ‘Speak, Francesca.’

‘We know each other,’ she said, touching the obsidian star hanging from its velvet ribbon.

She always dressed in black and white

On her long and slender neck hung a black marigold with a star made of obsidian sparkling with a multitude of tiny diamonds embedded in it.

You can see that the overall design of the star is different and very far from being simplistic. In fact, The Witcher 3 star is not a very accurate representation of that, but since it is a video game, small details would be not very visible to most players (however, CD Projekt RED were always faithful to the source and did not change the colours). Note also that the star is made of obsidian, which is a stone (I understand a metal might go as well, but it is still different; anyway obsidian must not be expensive) and it is black.

The final answer depends a lot on your actual question.

If you want to know, where a thing similar to this one appeared in Witcher games - then yes, it is based on The Witcher 3.

If you want to know, did this thing actually appeared in the Witcher games - then no, it did not, because the games were really close to the source, and this item comes impermissibly away from that.

As a person who played all Witcher games and read all Witcher books, I find this strongly outside the Witcher universe. This is just outside of Yennefer's character. This "black and white", "obsidian star" are not just random items that the author forgets in the next chapter, but they go throughout all the series of eight Witcher books of hundreds of pages, and are strictly adhered to in the Witcher games. 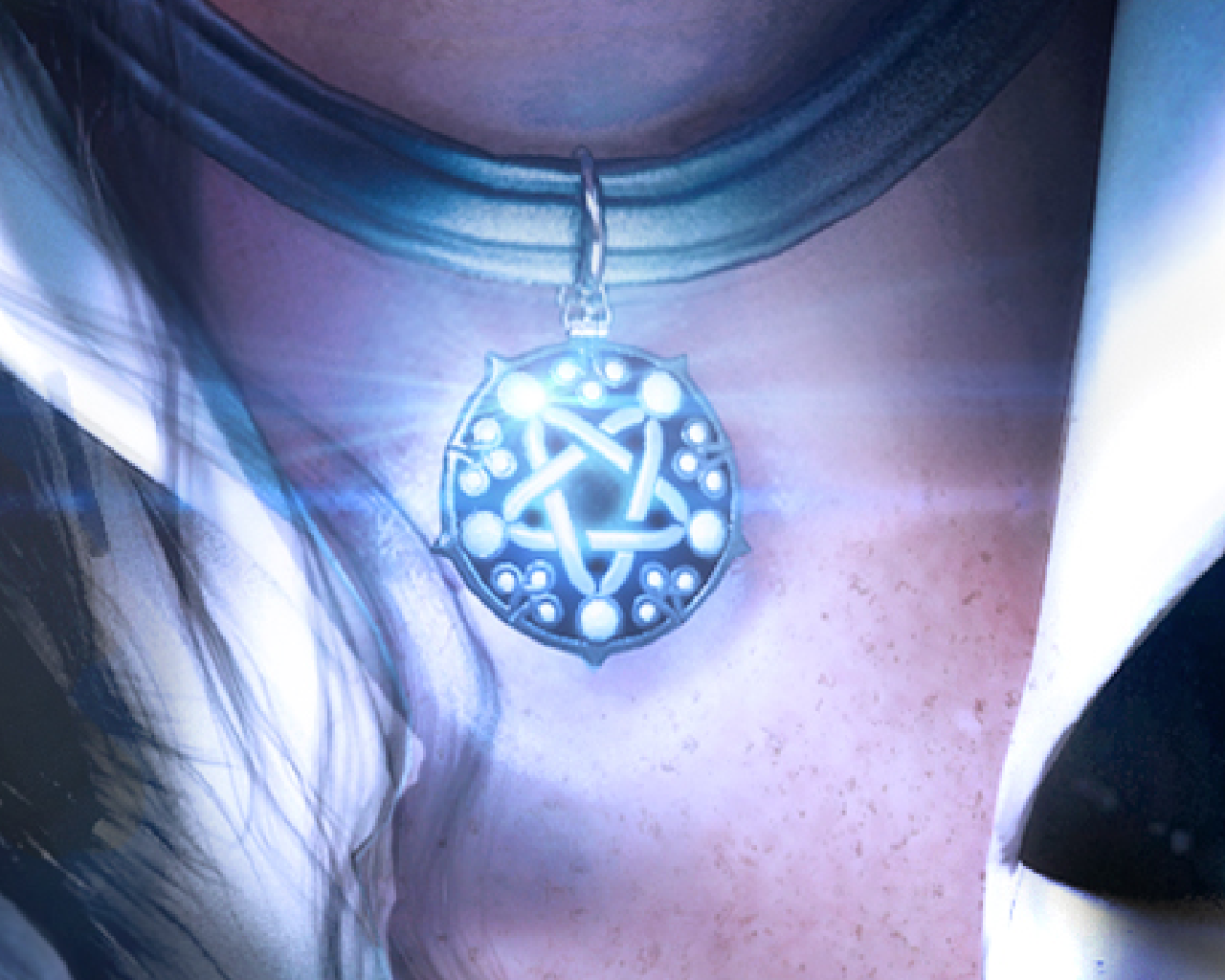 This is an image from the game (from Yennefer's artwork). It looks that the shop really tried to do their best to reproduce that: note the spikes near its border, that can be hardly seen in the low-resolution in-game version! The flowers are slightly more elegant and there are fewer straight lines (note the connection and the attachment oval; remember that Yennefer had curly hair and preferred frills to minimalism).

I found an article exclusively about Yennefer's outfit. In the very beginning it says: "One of the things that stands out about Yennefer is her impeccable fashion sense." There is also a dedicated "quest", when Yennefer disapproves of Geralt wearing wrong colours instead of black and white. With all that said, the article shows Yennefer with slightly blueish feathers on her shoulders in southern Beauclair.

She's too warm in her dark clothing and Geralt points out she could get a dress of different colors - for example, green and white. If Geralt later goes to Yennefer's room, he discovers she did indeed bought a new green-white dress. However, the game doesn't show Yennefer wearing it.

In the article Geralt himself is surprised in the beginning of the game (which is long after the end of the books, that is Geralt and Yen's whole lives): "He asks if all of her clothes are black and white, and Yennefer reveals that the one exception to this rule is her undergarments." And even in that quest there is a variant of not strictly black and white, when Yennefer approves Geralt's choice.

And a few citations from the Witcher 3 Artbook:

The books provided our artists with a great deal of detailed information about Yennefer’s appear- ance, including everything from her hairstyle, figure, and height to the color of her eyes and hair to such nuances as the shape of her face and nose. All of these traits were considered while drawing the concepts and creating the model for this sorceress.

Choosing the color scheme was the simplest part, because all the many descriptions of her in the books made it clear that she always dressed in tasteful combinations of black and white. The books also gave enough information to reconstruct a general style for the sorceress. White shirts with lace trim, long black coats, black trousers or stockings, and high- heels—all these elements suggest elegant attire that flatters Yennefer’s figure while accentuating her independent, strong-willed character.

During her travels, Yennefer would at times choose to don more masculine attire, trading in her long dresses in favor of more practical riding trousers. ... Like the rest of the sorceress’ clothing, this outfit maintains a color scheme made up of shades of black and white.

So my final words are that even though the game tried to somehow stir Yennefer's colour preferences with slight additions, those are mostly exceptions (honestly, raven feather would not be that blueish), and they were never applied to Yennefer's obsidian star.

And these are concept drafts of Yennefer's star from the Witcher 3 Artbook. They are very different, but their style looks more or less the same to me (and I can not say the same about the original thing in question).

Not the answer you're looking for? Browse other questions tagged object-identification the-witcher or ask your own question.

31
The ending of the Witcher saga
6
Is there any explanation for the Conjunction of the Spheres?
20
Is there any meaningful material in "Witcher" canon that requires playing games?
10
Is Kaer Morhen the place where witchers originated?
7
Why does Velerad question Geralt's action at the end of "The Witcher" short story?
16
In the books is Geralt an exceptional witcher?
6
What potions does the Witcher Geralt take before battle?
6
In the Witcher books does Ciri have a magical scream?
10
What happened to the "eels" in Aretuza?
11
Who are all the characters from the UK book covers of The Witcher series?