It was a novel classified as young adult.

I don't remember the character names.

First off, it was a full-length novel (around 300-400 pages, but I might be off by a lot). The cover is a sunflower-yellow background with a large white flower put on the solid yellow background.

In this, there are students who are under strict dystopian rules. This is the south side, and the north side is free. The protagonist is a girl who rejects society, while her younger brother accepts it. The main character finds refuge from society in art class, where the teacher is lax & does not follow the dystopian rule. One day, the art teacher went away, and a person named Mr. Green…...... (I forgot the rest) said the art teacher got suspended for not following the rules, and he was the new teacher of the new class of practicing rules of that society.

The first thing he did was take away everyone's jewelry. Then everyone's head was shaved by a machine, and I specifically remember the girl remembering her head was raw. She misbehaved some more (I forgot what), and she was deemed to become a stan (or stak? Ston? Idk, something around that). They took her to get a chip implanted so drones could track her anywhere, and she was loaded into the truck for the operation to remove her brain. Then, Mr. Green... rescued her from the operation before the truck left for the surgery center, dug out the drone chip from her flesh to prevent drones tracking her and escaped to the north side for freedom.

Another thing I remember is that on the school bus, the kids talked with their mouths closed, since talking in school was banned.

This had to be before 2017, since that is when I read it, but it could be MUCH older (just got it from library).

I know, second try, but The Silenced by James DeVita is a better match than my prior guess. As you can see, the cover is primarily yellow with a flower (albeit, to me, a rose) in the foreground. 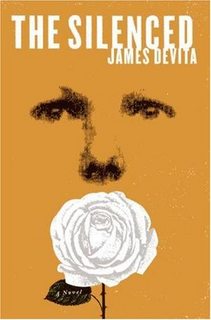 In a world with more than a passing resemblance to Orwell’s 1984, a war has ended in the creation of a police state bent on crushing dissent, run by the Protectorate of the Zero Tolerance Party. Living with her father and brother in a “social readaptation community,” following her mother’s execution for treason, Marena attends a school where youth are brainwashed to serve the state. After a teacher is arrested, Marena and two friends meet in secret to plan resistance. Meanwhile, a highly placed school official begins to question the Protectorate and its objectives as the resistance grows and the community is placed under heightened surveillance and control. As individual freedoms are eliminated, Marena looks to her mother’s choices for guidance in making her own, and in deciding how to respond to an evil she is powerless to overthrow. This otherwise tautly plotted novel is weakened by a confused presentation of the Protectorate and its aims. Does it seek to create a master race through Third Reich eugenics or to stamp out difference by destroying human individuality altogether? Ripe for discussion.

This review mentions the removal of parts of the brain for troublemakers:

A fictional account based on a true story of German resistance fighters against the Nazi regime, set in the future when government officials punish those who question their authority and surgically remove their brain centers that enable reading, writing, and speaking. A chilling supposition to loss of freedom of expression and the other rights Americans take for granted.

Borrowing the book via the Internet Archive, I found references to the children being forced to strip, shave their heads, and surrender their jewelry after the new order was enacted, and another search has the characters announcing drones that they have to hide from. Mrs. Crowley, her art instructor, is disappeared and a Mr. Greengritch is her replacement. At the beginning of the story, the protagonist boards the school bus, and indeed they talk barely moving their lips, "like ventriloquists". The "Stof" are the result of the brain operation (which Marena is indeed sentenced to undergo). They also serve as the state police as part of the result of the procedure is that they eventually lose the ability to think for themselves, and can only follow orders. In fact, they cannot disobey an order from a superior, which is how Mr. Greengritch frees her.

Parts of this match up with Slated by Teri Terry.

Kyla’s memory has been erased,
her personality wiped blank,
her memories lost for ever.

The government claims she was a terrorist and that they are giving her a second chance - as long as she plays by their rules. But echoes of the past whisper in Kyla’s mind. Someone is lying to her, and nothing is as it seems. Who can she trust in her search for the truth?

It's not total brain removal, but it does involve a wiping of the brain, with a later revelation that those "slated" also have tracking chips in their head, as well as the more known "Levo", a device attached to the "slated" which knocks them out if their emotions get too high. The protagonist, Kyla, has an art teacher, "Mr. Gianelli", who is removed from the school after a mild protest of the removal of another girl in her class, Phoebe, by the "Lorders", who enforce the government "slating" of troublemakers. However, there is no replacement teacher and no shaved heads. And, from the excerpts I've found, they do talk on the bus.

7
1970/80s YA novel about dystopian divided country of cities and countryside?
7
Sci Fi Dystopia: people classified by color coded bloodlines
18
Tracking down a very obscure novel about dystopian USA
16
Dystopian book series: girl goes out of the barrier her society lives in because of radiation
14
YA scifi novel where handedness is referred to as north and south instead of left and right
10
Recent Sci-Fi anthology. One story is about a detective tracking down people who use a drug to hop dimensions. Another is about social scores
10
Post-apocalyptic book; apocalypse caused by dinosaurs, people live underground