What happened to Mr. Morden's Family? 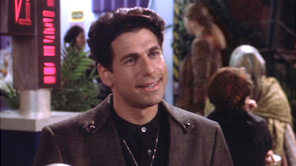 One of Babylon 5's classic characters was the mysterious Mr. Morden, but one thing I never totally understood was his back-story and then I read this:

Indoctrinated by the Shadows after his capture during an expedition to Z'ha'dum, the Shadows' homeworld, he has accepted to serve because of the Shadows manipulation of his guilt of the death of his wife and child and because they promise to save his family whom he believes are trapped in hyperspace.

I don't remember seeing this part of Morden's back-story in the TV series itself, but it is an awesome twist on a rockin' character.

What exactly happened to Mr. Morden's family and why does he believe that the Shadows can save them?

Extra Credit: What source materials does this back-story come from?

The book you would need for Morden's back story would be The Shadow Within. In brief, Morden's family die in a jumpgate accident and the Shadows manage to convince him that they are still suffering, and that their pain will be ended in return for his service. This book is described by J. Michael Straczynski as "about 90% canon", so it's by no means definitive, but that's as close as you're going to get. It's referenced in other canon sources, so is probably correct.

As to the "why" - the Shadows can freely travel through hyperspace without the benefit of beacons or gates. If anybody could find someone "lost" in hyperspace, it'd be the Shadows.

9
What are the principles of sentient life?
10
What happened to Catherine Sakai after Sinclair left B5?
17
What kept the Shadows from attacking Babylon 5?
5
What defines a sector or a quadrant?
8
What can Lyta do?
5
What did Trakis put on Londo?
11
What happened to Babylon-4 after the war between Shadows and Minbari ended a thousand years ago?
26
So what are technomages?
9
What happened to Zathras when Babylon-4 disappeared back in time?