Who are the villains at the end of the 90s X-Men cartoon intro?

At the end of the 90s X-Men animated series intro, there is a clash between the Professor Xavier's X-Men and Magneto's team. I recognize most of the villains, but am unable to identify a few of them.

Who are they, and did they appear in the series at all?

I have numbered them below according the the screenshot. 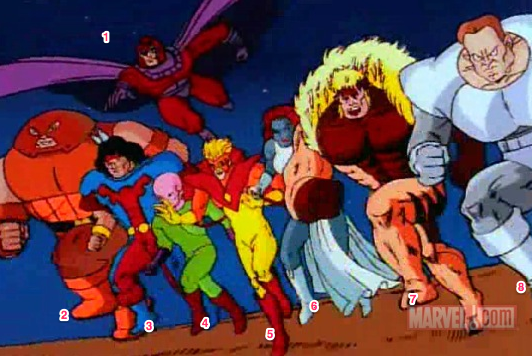 *With the recent 25th anniversary of the show and upcoming accompanying book, Previously On X-Men, some new information has come to light. In the book, Larry Houston, the main designer of the intro said that this character was an animation mistake that was never fixed. From an article on CBR.com:

“But the weirdest question asked about the titles concerns the little green man with the big bald head. Who is he? Fan sites have hazarded guesses. I thought I just didn’t know the books well enough. But Larry [Houston – the designer of the credits] recently told me (after a fan asked) that the bald guy was a mistake by AKOM (the animation studio) that they wouldn’t fix. He isn’t anybody! Who he may have been meant to be has long been forgotten. He’s just another example of a flaw caused by lack of time and money, but one that seems to have been forgiven by the fans.

Not the answer you're looking for? Browse other questions tagged marvel x-men character-identification or ask your own question.

21
Did Chris Claremont have to change his long-term plans for the X-Men in the early '90s?
17
Which Marvel Comics eras and story arcs does the '90s X-Men cartoon reflect?
5
Who are the X-men?
0
Who are the X-Men in X-Men Regenesis?
10
Is there a set limit on mutant abilities, where they're deemed too unrealistic?
5
Who are the villains in this picture?
5
Identify this X-Men scene?
7
Why does Cerebro use biometric security?
11
Did Bryan Singer make up the idea that Magneto's helmet blocks telepathy?
32
Captain Marvel vs Ms Marvel clarification