Ask Question
Asked 1 month ago
Modified 1 month ago
Viewed 490 times
5
This question already has an answer here:
Manga about a member of the hero's party who dies of old age, and is reincarnated hundreds of years later (1 answer)
Closed 28 days ago.

I searched for this manga for over an hour and I couldn't find it anywhere, so here I am.

I read it a few months ago. It's about a grand mage that uses lightning magic and reincarnates as his own great great ... grandson. In one of the first chapters, he trains with his brother (or something similar) and starts to fight against his own relatives -- a noble family -- and completely destroys them with a high level lightning magic (like 10th level ultimate magics). Also, I think he named it after himself and his name started with "E".

Not so sure about this one:

I think he had bad talent before he reincarnated, but was still one of the strongest.

Also really not sure about this one (could come from another manga): later he finds one of his old companions' descendants or something like that.

This is The Unsuccessful yet Academically Unparalleled Sage - A Cheating S-Rank Sorcerer's Post-Rebirth Adventurer Log.

After reincarnating in a different world, the great sage Ephthal spent all of his life researching magic. However, he who had aimed to reach the summit of magic, knew of the limits of his talents and fell into despair, thus closing the curtain to his lifetime. However, 400 years later, he reincarnated for the second time and enrolled in a magic academy using the sorcery and knowledge he acquired from his previous life. As if to sneer at the state of magic that had been in decline for the past 400 years, he easily invokes legendary class magic! With overwhelming power, the entire world will kneel before him.

At the beginning of the story, we're introduced to a wind mage named Ephthal, one of the four Great Sages of the Kingdom of Azul. After defeating the Demon King, alongside the other Great Sages, he's given the title 'Emperor of Thunder.'

As an old man though, he learns that he has no magical compatibility, which explains why he could never keep up with the other Great Sages, despite training more than any of them. He progressed as far as he did on the basis of of sheer hard work and willpower, rather than innate talent.

He later dies of old age and is reincarnated 400 years later as one of his own descendants. At the age of four, he regains memories of his previous life, and vows to become the strongest mage of his generation this time around.

He also discovers that even as a boy, he's just as powerful as he was in the prime of his previous life. In the second chapter, he's shown practicing magic with his older brother, and proves capable of casting much stronger spells. 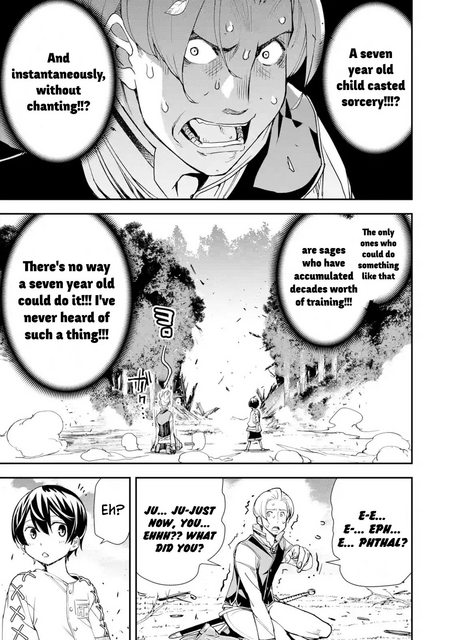 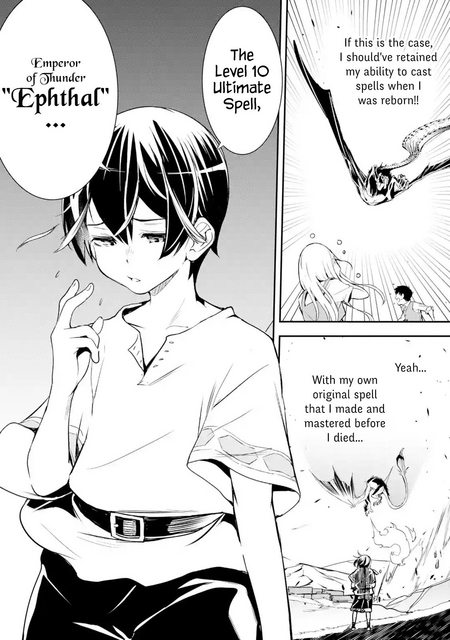 4
Manga about a member of the hero's party who dies of old age, and is reincarnated hundreds of years later

17
Looking for the name of a Fantasy book where magic ability determines royalty
32
Manga about a female worker who got dragged into another world together with this high school girl and she was just told she's not needed anymore
1
Manga where man reincarnates into his own novel where his familiar is a white tiger and the main hero that he invented uses a king slime
4
Male lead is last human surviving, who gets killed and reincarnated back to when he's a child
0
What is the name of manga where the Main Character gets bored in his own world due to him being the strongest and uses reincarnation magic
4
Manga about a member of the hero's party who dies of old age, and is reincarnated hundreds of years later
2
Manga where MC uses his own lightning magic on his mind to change his memories and personality
5
Fantasy manga about a noble main character frowned upon due to a lack of magic skills, and abused by his fiancée