Who Is the Clone Trooper in Kenobi

In the second episode of Obi-Wan Kenobi, we see a grizzled clone veteran on Daiyu. He asks for money, and Kenobi tosses him a coin. Who is this?

During research, I found that he was played by the same actor who played Jango Fett and the clones. He could also be Rex, as he has the colors of the 501st Legion. Or Kix. I think this cameo may be important later on. 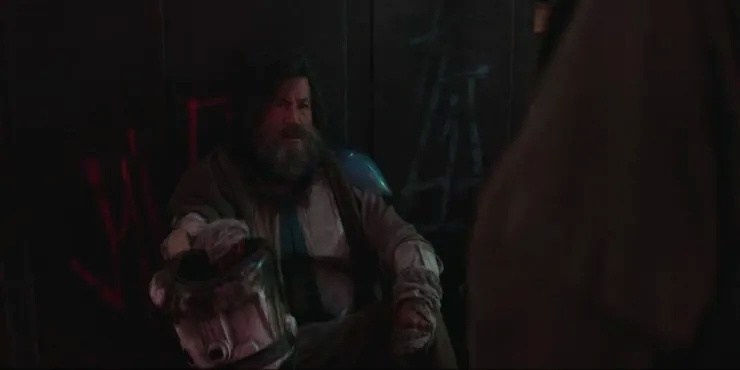 The episode merely credits him as "Veteran Clone Trooper."

I don't see any implication that it's meant to be a returning named character or a hint of something to come. Instead, the scene represents how much the galaxy has changed since the Clone Wars and also demonstrates Obi-Wan's kindness.

He's likely not Rex or any other prominent 501st member since he doesn't seem to recognize Obi-Wan. Obi-Wan interacted with the officers of the 501st regularly.

Additionally, Captain Rex being destitute and alone doesn't really match with what we know of his life before and after the events of the show.

44
Has anyone ever heard of a crazy interpretation of the original trilogy where Obi-Wan is really OB1 and a clone?
34
Does Boba Fett know his exact relationship with Jango Fett? If so when/how did he find out?
10
Was the Duchess of Mandalore named Satine as a reference to Moulin Rouge?
17
How does Obi-Wan reconcile the fact that the Separatists apparently commissioned the clone army for the Republic?
6
Darth Vader's relationship with the 501st Legion
7
Were the seismic charges in Attack of the Clone the first use of a delayed sound effect in space?
21
Is Palpatine just lucky that Obi-Wan discovers the clone army and then the Separatist plot, justifying his emergency powers?
3
How did Jango Fett get permission to reside near the army of clones?
16
Are these scenes from the Star Wars prequels reused in The Book of Boba Fett?