About how big is the Mos Eisley Cantina?

Is there any reputable information about the dimensions of the Cantina? About to what scale to the real thing is the lego set?

The closest thing to this is probably the cross-section from Inside the Worlds of Star Wars Trilogy, later reprinted in both Legends and Canon in Star Wars: Complete Locations: 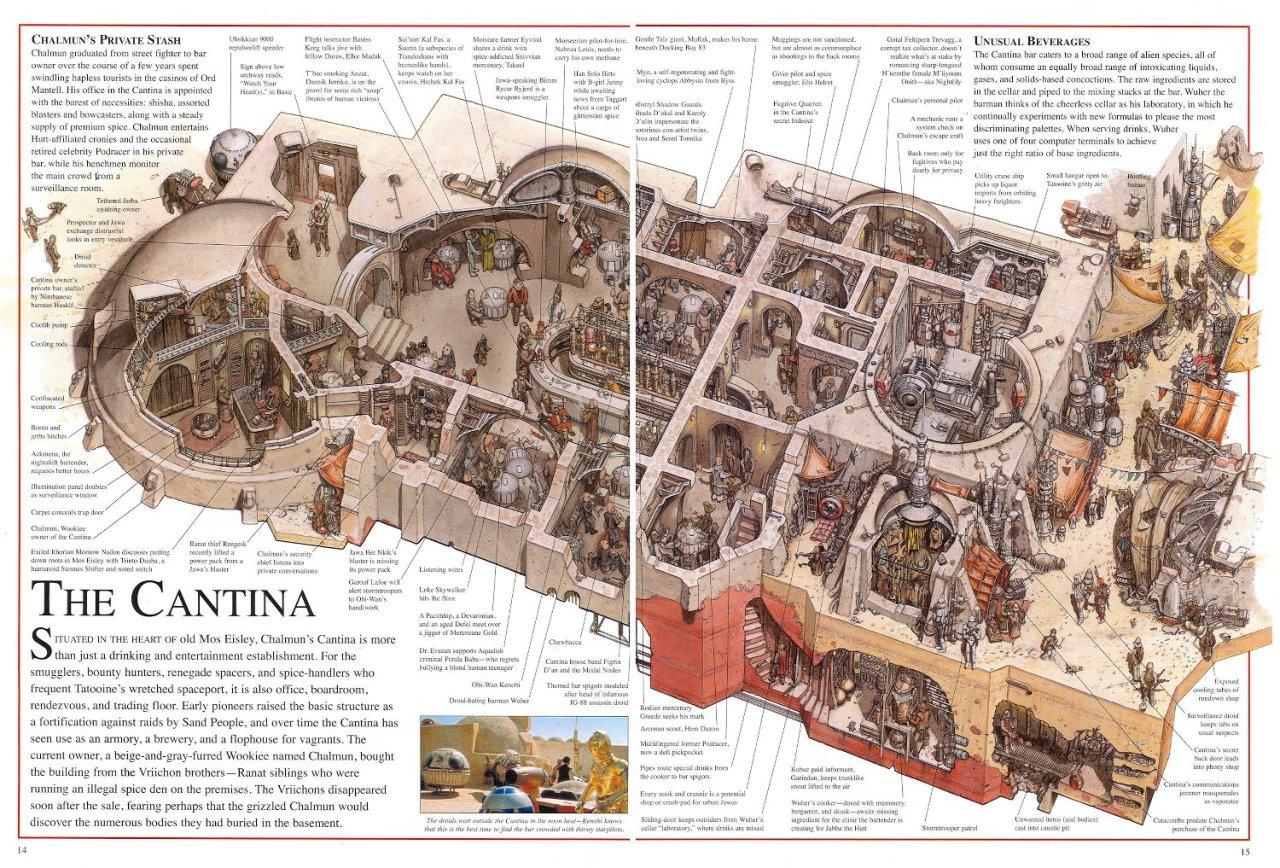 This illustration doesn't give exact dimensions. Another illustration is provided in the Star Wars Technical Journal, also without dimensions and this time without human or alien figures for reference: 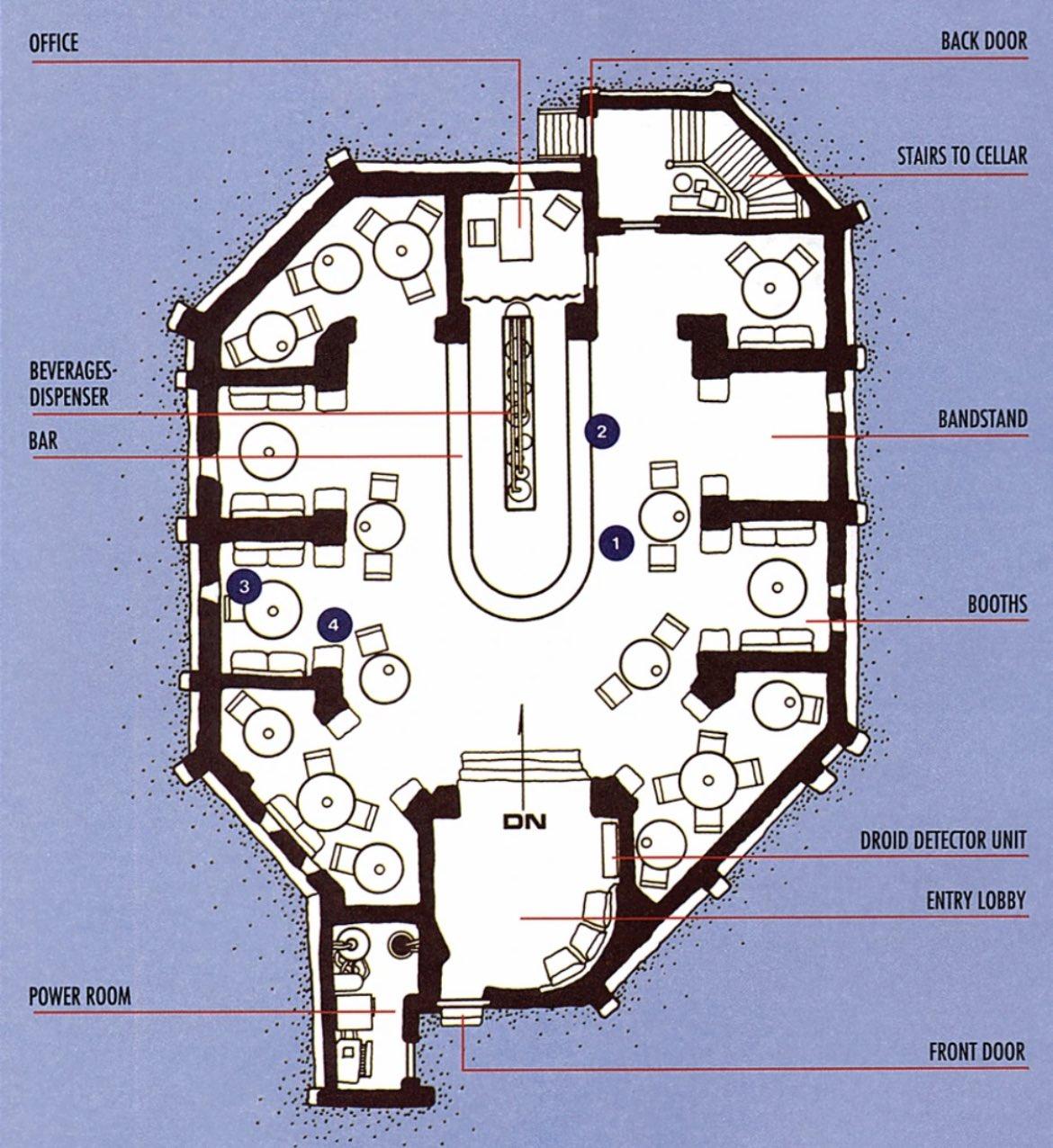 The layout of the Lego model is closer to the Technical Journal's interpretation: 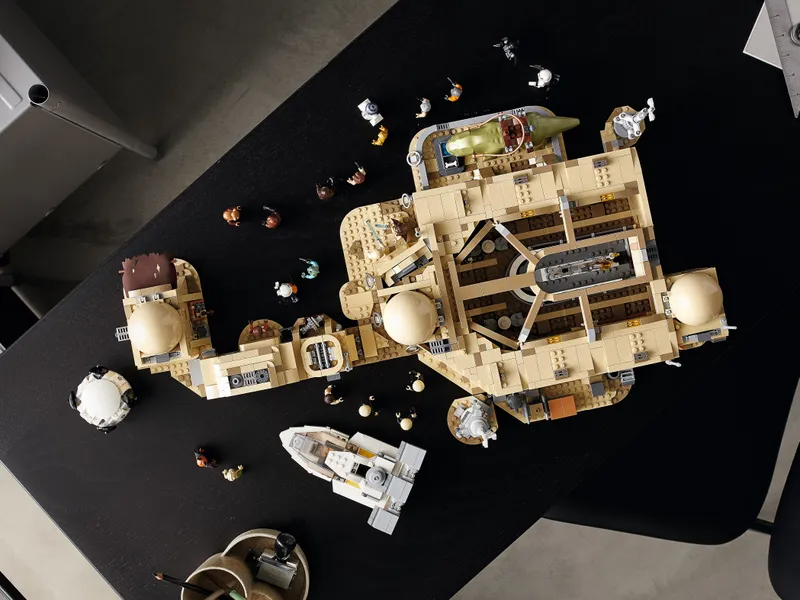 Eyeballing it, the Lego model looks like it's within 1.5x of the scale of the bar section, although there's not such a thing as exact scale with Lego since minfigures have stylized proportions. In an interview with the set designer, the set is described as being minifigure scale, though this seems to just mean in a general sense:

How does designing sets which are accurately scaled beside minifigures, like 75290 Mos Eisley Cantina, compare with those which must be scaled down, such as 75244 Tantive IV?

Both the Tantive IV and the Mos Eisley Cantina had a similar main goal: achieving good playability while at the same time being displayable and truthful to the source material. Of course, when a model is designed at minifigure-scale it is a bit easier, at least for me, as you don’t need to make as many compromises regarding what to include. This happens because sets that are scaled down are frequently larger ships or locations which are full of details and rooms where important scenes occur. That means we have to choose what is best to include.

For instance, in 75244 Tantive IV, we had to decide whether we wanted to put more detail and allocate space to a meeting room or the iconic corridor where the battle occurs onscreen. On the other hand, in 75290 Mos Eisley Cantina, we made the decision to include just six alcoves instead of eight but none of them have less detail or are significantly smaller than they would if we had chosen to include all eight. At the end of the day, they are quite different to design but I cannot say that I prefer one over the other.

We get a good view of the Cantina in the Star Wars - Complete Locations factbook.

If we take Luke Skywalker's height as a guide, the distance from the entrance portal to the back of the bar seems to be about 12 metres (40ft) and the bar itself is around 12 metres in width, with some side rooms and booths. This gives a rough ground area for the bar of 144m2. 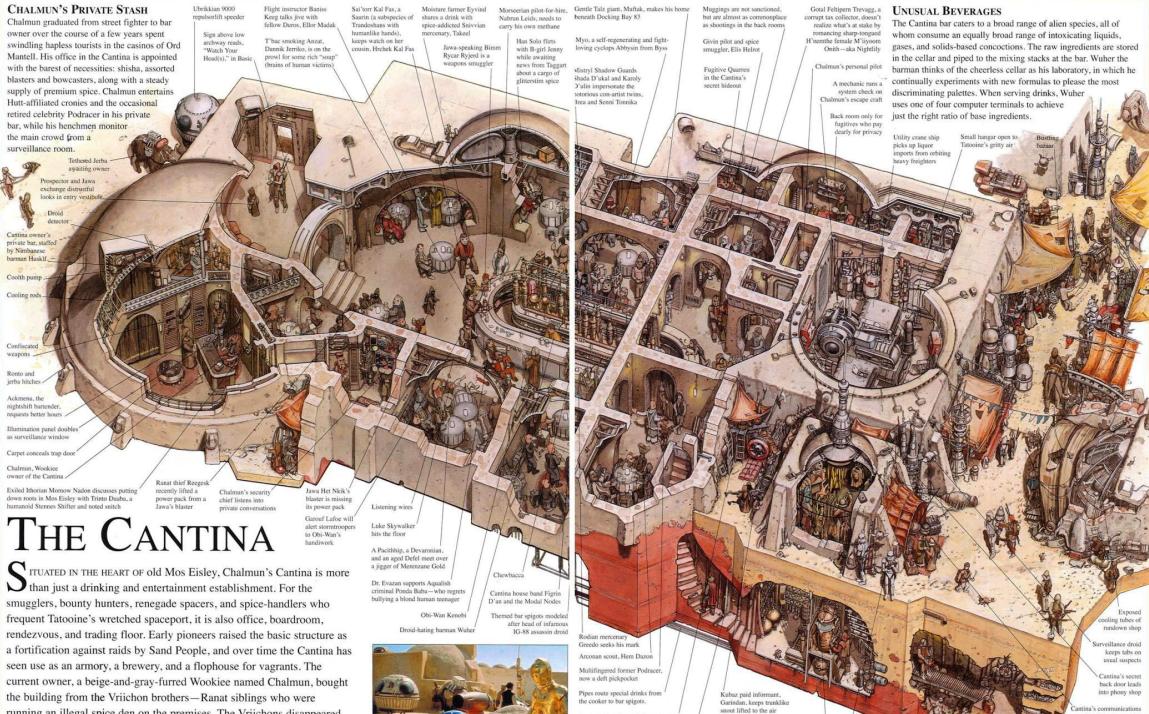 Note that this calculation doesn't include underground storage and a set of catacombs that are under the Cantina which may effectively double (or more) the available area.

There's also a floor plan of the Cantina Bar in the Star Wars RPG module Galaxy Guide #7 - Mos Eisley. The dimensions here seem rather smaller, About 8m x 8m, giving a total ground area of 64m2 (which seems to me to be smaller than what we see in the film). 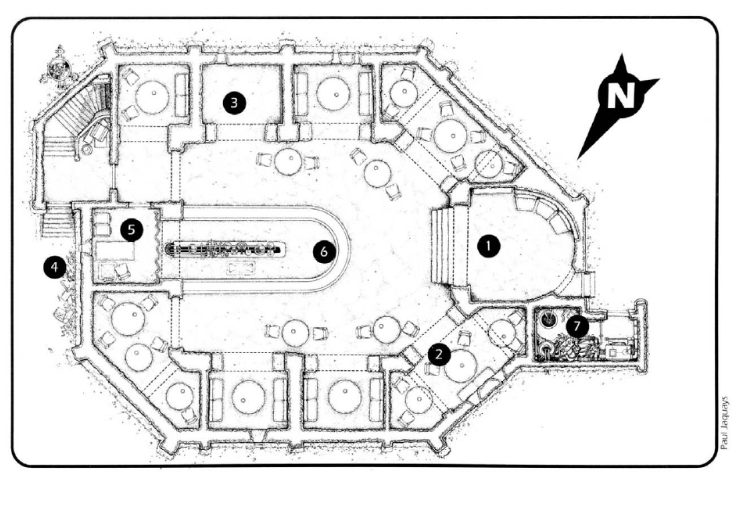 The scale of the Mos Eisley Cantina™ Lego Set (#75290) is deceptive because when folded, it's intended to represent an exterior view, but then unfolds to represent the interior of the bar at a much more generous scale. 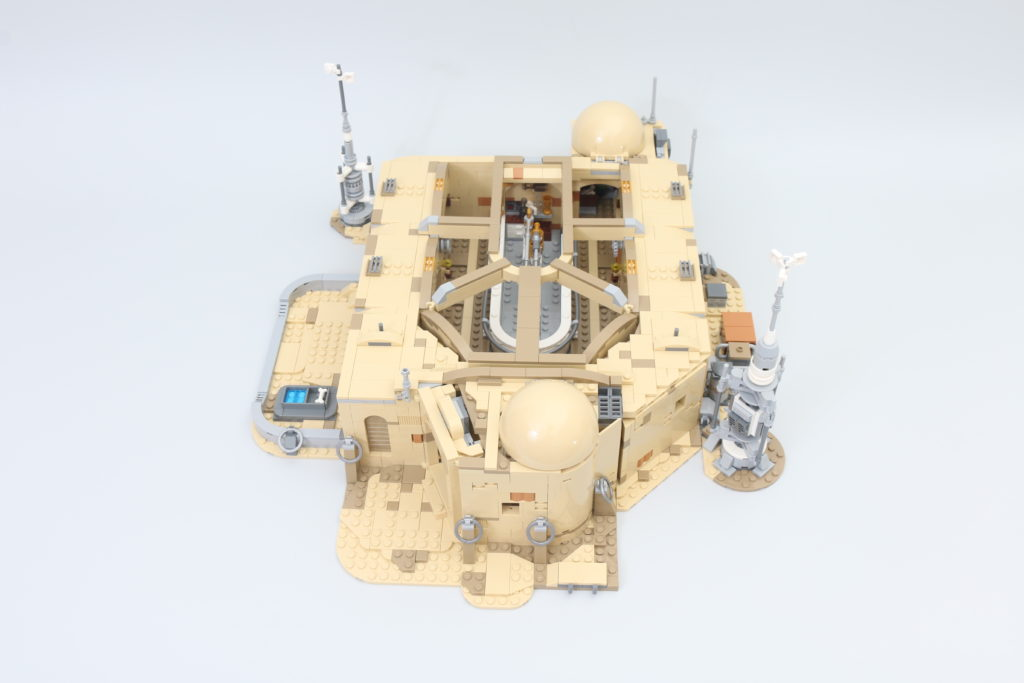 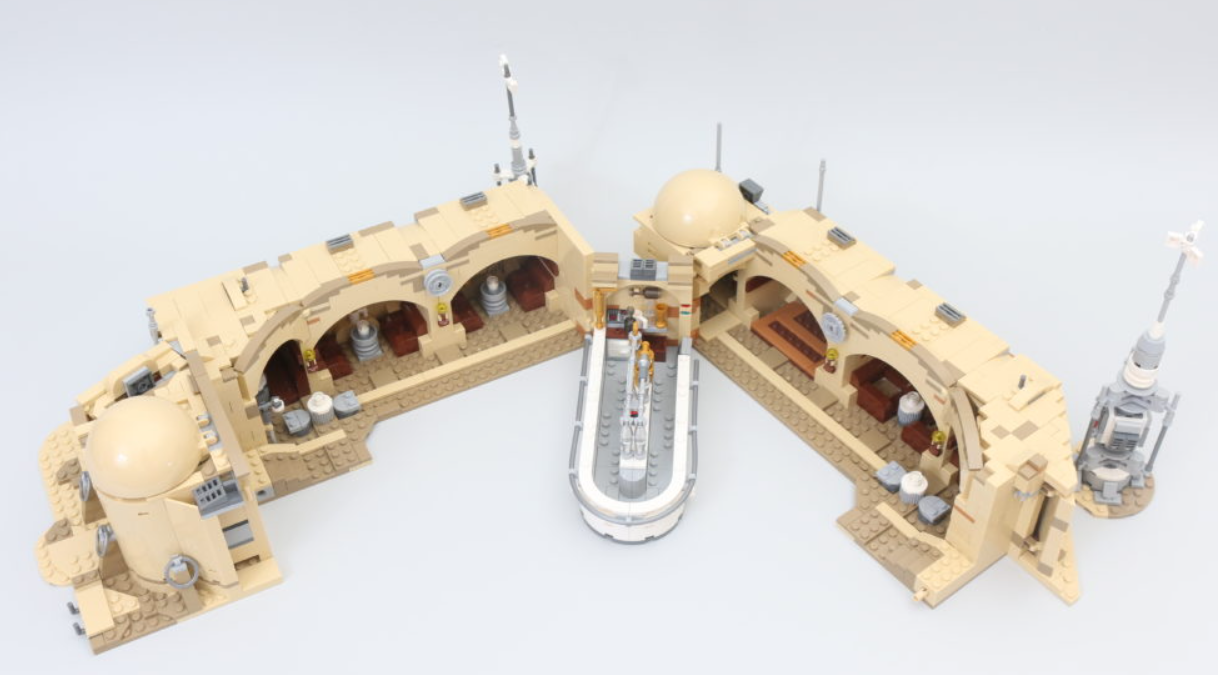