About 5-7 years ago, I stumbled upon a forum post with a few paragraphs written about a spaceship that started with the designs of a "normal" sized military type starship, and just scaled up the dimensions. It used that ship as an example of poor design.

Some specific details I remember:

What I can't remember is whether the quoted text was originally from a book, or fan fiction, or an just an old forum post. I do remember that when I saw it, it was posted as a quote (not original content at the time I saw it), and the post implied that what it was quoting had been around for a while. I'm 99% sure that it was on a vBulletin or phpbb site, and not Reddit, but not a forum that I frequented, so I don't remember the name.

I have done a few searches over the past couple of years for fictional spaceships with huge windows and long commutes, but I haven't found anything close to what I remember. If anyone could help me find either the forum post, or any ideas on where to look for the original source, that would be awesome. It's kind of funny, but that one snippet of a forum post has stuck in the back of my head for years, and I'd like to find out if it came from a longer source.

That sounds like a meme from Star Wars about the continually increasing size of the Star Destroyers.

It's called the 'SDSD Freudian Nightmare' and ticks all of the boxes. 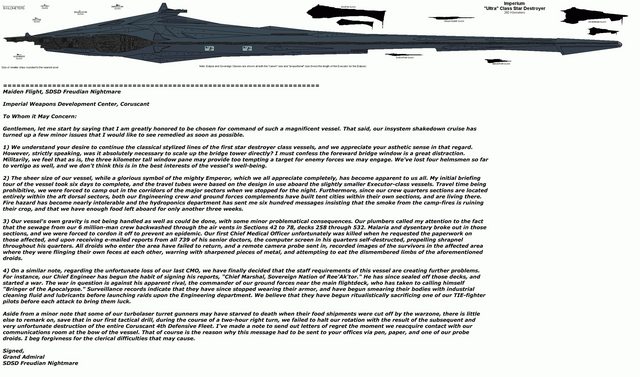 9
40s or 50s scifi short story contact with alien spaceship
8
Old sci fi cartoon - Yellow round spaceship and an alien crew on a planet and maybe a maze
3
Sci-fi anime set in space with a spaceship on the run from bad guys
8
'80-'90s sci-fi movie about a prison spaceship orbiting the Earth
16
Short(?) story with planet-wide spaceship-digesting plant life
13
Trying to ID a movie I watched in the '90s, featuring a spaceship with a logo showing a star being held between the thumb and index finger of a hand
31
1980s paperback about a man who traveled on a spaceship made of ice
5
Space thriller movie where two humans try to cross the edge of normal space in a spaceship