Did Harry Potter ever wear contacts?

I've read all the books and have seen all the movies (at least 3 times), but I've been wondering: Is there ever a time when Harry wears contacts instead of glasses? My memory is pretty good, but it's not that good ;) I'm so used to seeing him in glasses that I've never really thought about alternatives.

There is nothing in the books to suggest Harry wore contact lenses at any point during the series.

However, in both the movie and the book Harry Potter and the Deathly Hallows (part 2 in terms of the movies), during the King's Cross scene (where Harry is "killed" by Voldemort) he becomes conscious of not wearing or needing glasses while in that state of stasis.

He sat up. His body appeared unscathed. He touched his face. He was not wearing glasses any more. 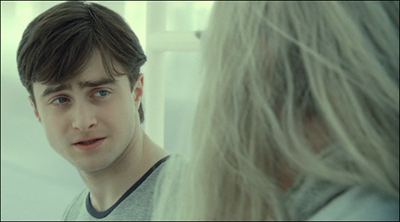 Moving on, I don't think J.K. Rowling would have wanted Harry to wear contact lenses; the fact that her hero wore glasses had personal significance to J.K. Rowling:

Eun Ji An for Raincoast.com, Canada: I was wondering why Harry had glasses?

J.K. Rowling: Because I had glasses all through my childhood and I was sick and tired of the person in the books who wore the glasses was always the brainy one and it really irritated me and I wanted to read about a hero wearing glasses. It also has a symbolic function, Harry is the eyes on to the books in the sense that it is always Harry's point of view, so there was also that, you know, facet of him wearing glasses.

As late in the series as Deathly Hallows, Harry is still wearing glasses, as evidenced in the chapter The Seven Potters:

‘Harry, your eyesight really is awful,’ said Hermione, as she put on glasses.

As well, in the wizarding world, some physical ailments seem to be unable to be fixed by magic. One could make a case for utilizing Muggle treatments (which contact lenses would be), as Arthur Weasley accepted Muggle stitches for Nagini's bite when the wizarding treatments the St. Mungo's staff was giving him didn't work as well as they should have. Molly Weasley had a fit over this; however, Harry himself was raised in the Muggle world and might have been more amenable to contact lenses than purebloods or half-bloods who grew up in the wizarding world. This is just one point of view to consider.

To reiterate, there is no canon evidence that Harry Potter ever wore contact lenses or had Lasik surgery or fixed his eyesight magically or anything like that.

Harry is never mentioned as wearing contacts, including where he would be the most likely to do so (playing Quidditch). To the contrary, the book stresses that he wore regular glasses, since Hermione needed to magick his eyeglasses to be rainproof when playing in the rain..

The "never" comes from my search of all the relevant sources:

24
Abuse over celebrity for Harry Potter: Did Dumbledore choose correctly?
7
Were "green eyes" ever mentioned in the movies?
10
Harry Potter fanfiction where he wakes back up from death with no memories, has secret rooms locked by password
52
Why didn't Harry continue Dumbledore's Army sessions in the Half-Blood Prince?
36
Who got drunk in Harry Potter?
14
Are there any significant plot elements in Fantastic Beasts that will be missed if I haven't seen the Harry Potter films?
14
Other than edits for international editions, did Harry Potter and the Philosopher's Stone receive errata?