In WALL•E, why does everyone get thrown when the Axiom suddenly lists?

In WALL•E when Captain McCrea is fighting for control of the Axiom, he ends up forcing the ship to abruptly list when he's thrown off of Auto. This, of course, has the undesirable side effect of throwing everyone that was gathered on the Lido Deck out of their hoverchairs, and they all go sliding down the deck until they hit the walls of the ship.

My question is: Why are they all thrown from their hoverchairs when the ship lists?

It's not as if there's an actual up or down in space; down is a relative direction and usually happens beneath your feet.

Especially when there's use of artificial gravity. The only reason we know that the Axiom is listing at all is because we see her doing so while the camera is fixed outside; to everyone else, it should've gone unnoticed.

In the trivia notes for the Axiom Pixar Wiki it says:

When WALL-E first sees the Axiom, it is located behind the Horsehead Nebula.

A large Nebula which is starting to form star clusters would have gravity. It is possible the artifical gravity in the Axiom has adjusted itself to deal with the nearby nebula. So when the Pilot yanks the wheel and causes the ship to list, the adjustments made are no longer valid, causing everyone to slide.

Consider this image, which is not based on science. 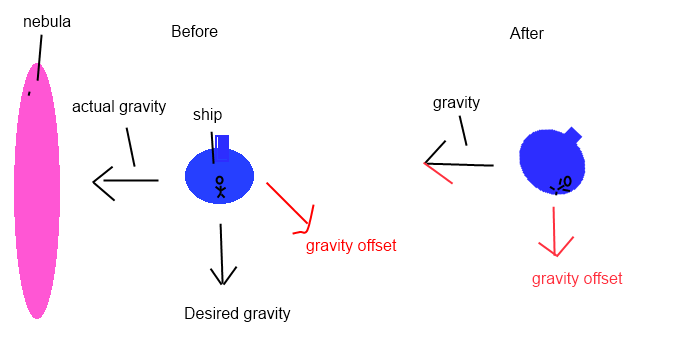 Though this may be obvious, I think this was just as much for cinematic effect as the infamous fire extinguisher space flight, and had just as little regard for scientific reality put into its implementation.

But I love a good bit of tangentially scientific speculation! So, let's assume that AUTO controls the gravity of the ship: this would allow it to more effectively stymie the bone deterioration of its passengers, and perhaps create an offset in the event of gravitational interference from planets, stars, nebulae, etc. while it's flying around the galaxy -- as pointed out by user Jack B Nimble.

Now, the ship lists to the side when the captain and AUTO are fighting. It's possible that whatever variable of sentience AUTO has acquired in 700 years is capable of interfering with its mechanical functions -- thus, the gravitational status quo of the ship falters when AUTO is disoriented or surprised by the Captain's assault.

That's the best I've got, though.

Not the answer you're looking for? Browse other questions tagged movie physics artificial-gravity wall-e or ask your own question.

16
Why does Mjolnir fall down in Age of Ultron but not in Endgame?

9
Revelation Space - Why didn't the ship get trashed when Volyova put it into reverse?
56
Why was Wall•E the only remaining Wall•E unit?
14
In WALL•E, what kind of economy was used on the Axiom?
4
Why does the Id Monster not simply kill everyone?
8
In Interstellar, why does zero gravity only exist some of the time in space?
39
Why does Wall•E have recording equipment?
13
Why does Auto wake up the ship's captain when EVE returns?
11
Why was the Axiom located so far away from Earth?
3
Why did the hover-chairs deploy oxygen masks when the captain activated the Holo-Detector and the passengers went to the Lido Deck?