Why did the Federation struggle so hard to understand the Tamarians?

Federation vessels have encountered Tamarian ships seven times over the past one hundred years. Each meeting went without incident, however formal relations were not established because communication was not possible.

The viewer quickly sees that Tamarians are basically speaking English, but with emphasis on unknown proper nouns. Yet we are to believe that in 100 years no one in the Federation would have noticed that they are speaking in metaphor? Can someone explain to me any in-universe explanations for why this was so difficult for anyone in the Federation to understand?

It is relatively easy to recognize that they are speaking in metaphors. It is rather harder to understand just what a particular metaphor means if it refers to people, places, and things outside your own culture.

Do you know what "runs like a red moped" means?

Maybe you understand "like under Hampels' bed" without it being explained to you.

Both expressions are used in German (in the area I live in,) but I doubt you will be able to make sense of them - unless you have seen an example of both expressions in use.

In the Star Trek episode, the Tamarians use references to people and places from their own culture and planets - as well as other cultures and planets.

It took Data sorting through databases of many cultures to find the references - and still, you have to interpret the references once you've found them.

Even just finding the reference is a colossal task. How do you find a place when you've only heard its name pronounced? How do you know you have a place's or person's correct name? What if the name you have is one of many possibilities, but not everyone knows all of the variations?

Take the capital of Cyprus, the city of Nicosia. It is known as Nikosia, Nicosia, Lefkosia, Λευκωσία, Նիկոսիա, Lefkoşa, and Nikusiya. What if the metaphor refers to the Arabic form (Nikusiya) but your reference materials only cover the Turkish form Lefkoşa? Say you are trying to end a war, and you keep getting told "Λευκωσία." Your references don't have that spelling, so you keep missing the reference to the divided city of Nicosia as a way to make a peaceful end to the war.

Recognizing that the Tamarians are using metaphors isn't that hard. Interpreting the metaphors in relation to the current situation to get the point of the communication is the difficult thing.

Picard figures out the metaphors because Dathon has put himself and Picard in the situations described in the metaphors.

Data makes some (limited) sense of the metaphors by doing extensive searches of the culture and literature of all known planets around and close to the Tamarians home planet.

Why didn't the universal translator translate the gist of the thing?

My examples are simple metaphors.

In the TV episode, the metaphors are references to entire epics. "Darmok and Jalad at Tanagra" isn't a simple, single thing. It is an entire epic story. The universal translator can't convey all that belongs to that entire epic in just a few words. The translator is trying to keep up with spoken words - it would have to be able to read the entire story from the speaker's mind, filter out the relevant bit, and translate just that releavant bit fast enough to keep up with the spoken word. Try telling the story of "Darmok and Jalad at Tanagra" (or even just the relevant bits) in just the space of time it takes to say five words.

Look at it this way:

If you and I are talking about someone, and I say "Deliverance" then you may well know that I mean the banjo playing kid because our mutual acquaintance also plays the banjo (and also otherwise resembles the banjo playing kid from the "dueling banjos" scene.) If I just walk into a room full of people and say "Deliverance," then nobody is going to know what part of it I mean - or even what I'm talking about, since "deliverance" is not just the name of the movie, it is also a (somewhat) commonly used word on its own.

That's the position the universal translator is in. It translates what it can, but can't make sense of the baggage behind the spoken words.

German: "Geht ab wie ein rotes Moped." Simplest form: something (vehicle) that is very fast. Also used to refer to a person doing something loudly and enthusiastically, though not necessarily well. "Fritz ging ab wie ein rotes Moped auf dem Rammstein Konzert gestern Abend." Fritz went wild at the konzert - probably dancing or singing (screaming) along with the songs. "Moped" in German is the same as "moped" in English, except that full size (powerful and fast) motorcycles are deprecatingly referred to as mopeds by their riders. "Red moped" because red painted anything is faster than other colors.

German: "Wie bei Hampels unterm Bett." "Hampels" are your low life neighbors, the ones who never clean house. The ones with filthy floors and stuff piled on the furniture. If something is in the way, they just kick it under the bed - dirt and all. There's a horrible mess of filthy stuff just tossed under the bed any old way. If something looks "like under Hampels' bed," then it's a collosal, dirty mess.

Neither group had ever tried to actually take the time to figure out.

Data: Federation vessels have encountered Tamarian ships seven times over the past one hundred years. Each meeting went without incident, however formal relations were not established because communication was not possible.

These short encounters led to confusion, frustration, and simply turning around and leaving.

Tamarian Dathon however, seems intent on forcing the issue and finding a new way to establish communications.

I think what JRE is trying to say is that the stories have something more to them than mere metaphors. They have emotional connection. There's a good scene for the benefit of the viewers (emphasis mine)

DATA: The Tamarian ego structure does not seem to allow what we normally think of as self-identity. Their ability to abstract is highly unusual. They seem to communicate through narrative imagery by reference to the individuals and places which appear in their mytho-historical accounts.
TROI: It's as if I were to say to you, Juliet on her balcony.
CRUSHER: An image of romance.
TROI: Exactly. Imagery is everything to the Tamarians. It embodies their emotional states, their very thought processes. It's how they communicate, and it's how they think.
RIKER: If we know how they think, shouldn't we be able to get something across to them?
DATA: No, sir. The situation is analogous to understanding the grammar of a language but none of the vocabulary.
CRUSHER: If I didn't know who Juliet was or what she was doing on that balcony, the image alone wouldn't have any meaning.
TROI: That's correct. For instance, we know that Darmok was a great hero, a hunter, and that Tanagra was an island, but that's it. Without the details, there's no understanding.
DATA: It is necessary for us to learn the narrative from which the Tamarians drawing their imagery. Given our current relations, that does not appear likely.

JRE gave the example of "Runs like a red moped." That's a metaphor, but it's also a mere colloquialism. What the Tamarians are doing isn't using mere metaphors (where I say one thing that means another), but tying into the emotional connection from the story itself.

The Tamarian needs that emotional connection (which is what a mere metaphor cannot do). Hence the analogy of "Romeo and Juliet" that Troi mentions. Juliet is pining for her lover on the balcony. It connotes romance and/or love. If I were to say "New York, when the towers fell." it would connote distress and/or horror, but only if you know the full context beyond it being a mere historical event. These are far more than simple metaphors, unfortunately. The emotional context makes it impossible to discern the meaning of what they're saying by merely understanding the words and what they mean.

Picard then tells him the story of Gilgamesh, a human story with the same type of emotional connection. It tells Dathon he has succeeded. When Picard has to stop the fighting between his ship and Tamarians, you'll note Picard has to indicate he has understood that connection (emphasis mine)

Picard uses the correct emotional stories to communicate. The Tamarians respond by declaring that Picard's adventure on the surface is now a new emotional story for them.

The audience needs to be able to get a handle on it. They wanted to tell a story about a species who the federation struggled to communicate with, but they can't make them so cryptic that the audience have no hope of following along with the quest to understand.

As it turns out, the mode of communication ended up mirrored in popular culture so that it now seems even more blindingly obvious to anyone who grew up with the internet. 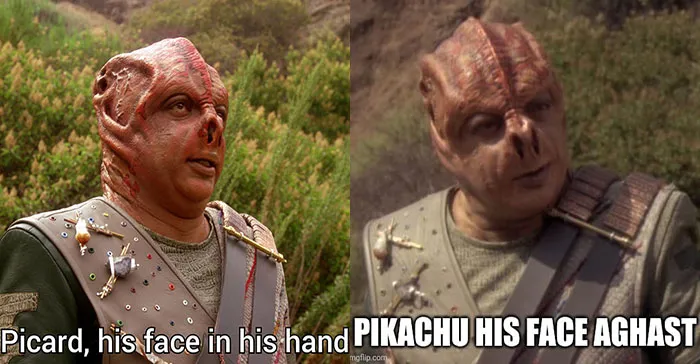 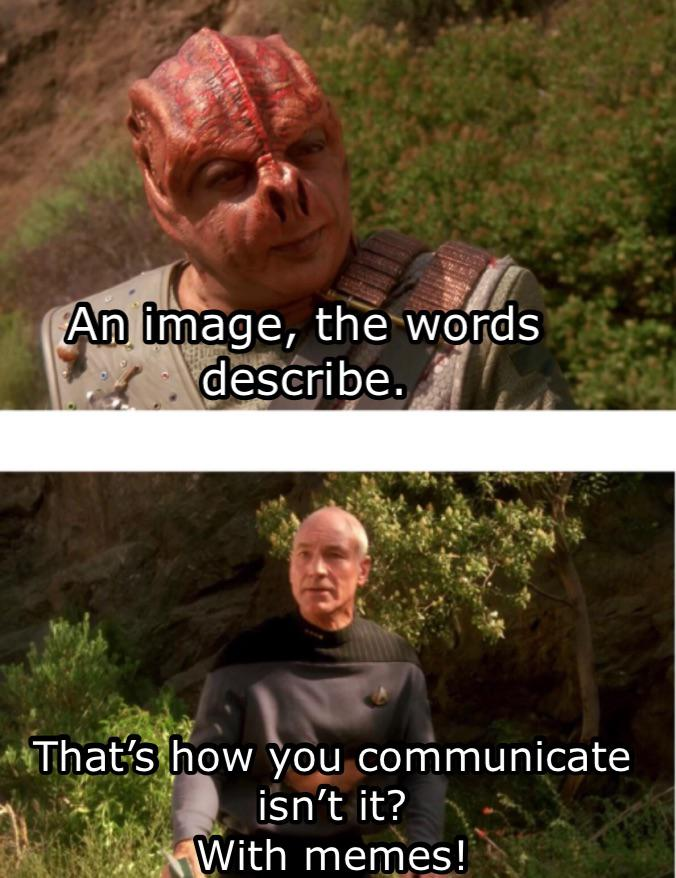 Because of the design of the Federation's universal translator, which is optimised for a specific use-case, namely languages that use single words to convey things. This makes sense as the vast majority of races in the Star Trek universe utilise this mode of speech, so the translator can perform a 1:1 translation of ⟨alien word⟩:⟨your language word⟩ – and it does so almost instantaneously. This makes conversation between different languages almost seamless, which is what the translator is designed to achieve.

Where such a translator falls over – and hard – is in translating metaphors, because those absolutely aren't a simple 1:1 mapping; they require the translator to store multiple words and attempt to derive context from them. This is a far, far, far more difficult proposition that requires far, far, far more in the way of computing power, algorithms, etc. – especially in realtime. Basically it's a whole different ball game that would require a significant development effort from the Federation and for a single race, that doesn't seem particularly worth it.

Of course, it seems a little difficult to swallow that a coalition as advanced as the Federation would be incapable of developing such a capability, but that's missing the forest for the trees; this episode, as with most great Star Trek ones, is about making viewers think differently about things like language that they take for granted.

50
Why do the Borg have such a hard time understanding individuality?
29
Did Data have enough memory or "hard drive space"?
34
How did the Tamarians of ST:TNG manage technical language?
5
Does the Federation ever establish full relations with the Tamarians?
42
Did the Klingons join the Federation?
5
Did the Federation make peace with the Cardassians in anticipation of the Borg threat?
6
Is the Darmok Episode the only time we see Tamarians?
5
Did Federation impose themselves to Malcorians?
22
In "Pen Pals", how did Data understand Sarjenka's transmission?