Movie where a painting comes alive in a young man's dream

It's a movie about a painting that comes alive in a young man's dream while he stays at his uncle's house. 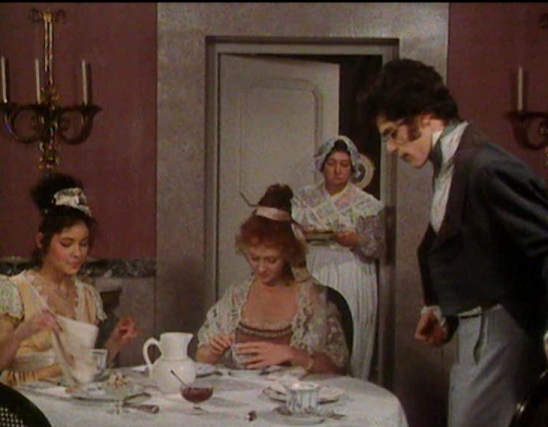 The episode was called "Hercule aux pieds d'Omphale" and was an adaption of Théophile Gautiers story "Omphale" from his book "One of Cleopatra's Nights and Other Fantastic Romances" that was published in 1882.

The story is told from the viewpoint of Théophile himself that spent a few weeks with his uncle, the owner of an old rococo-style house. The walls of his room were covered with a tapestry representing a mythological scene: Hercules sitting at the feet of Queen Omphale. Both Hercules and Omphale was painted to resemble the uncle and his wife Julie.

At night Théophile dreams that the queen leaves the tapestry and that they make love. It is hinted that these dreams really are Julie seducing him while he sleeps, but it is unresolved. Hercules/The uncle gets suspicious about this though and has the tapestry removed.

Years late Théophile finds the tapestry in a antique store, and he thinks the queen winks at him. He tries to buy it, but before he has returned with money the tapestry has been sold.

1
Sy-fy channel movie: scarecrow comes alive and attacks a farmer's son and a school bus, farmer retaliates
9
(Children's?) Movie where a man turns another man's heart into stone
5
old scifi movie about a traveler who comes to earth
2
Movie about an alien (or parasite) that comes out a man's mouth and enters a woman's mouth
3
90s(?) Movie where young boy's virtual girlfriend becomes real
8
Comic where a robot "takes apart" a man's body while he's alive
5
SciFi space film where a young person builds a space ship that comes to life
9
Old movie where young astronaut returns to Earth very aged