Anime with a girl in a school uniform looking through binoculars, whilst sitting on the shoulders of a boy holding her aloft

Here’s a short clip of the anime: https://vm.tiktok.com/ZMNbhsCVW/?k=1

It is A Good Librarian Like A Good Shepherd (Episode 8) 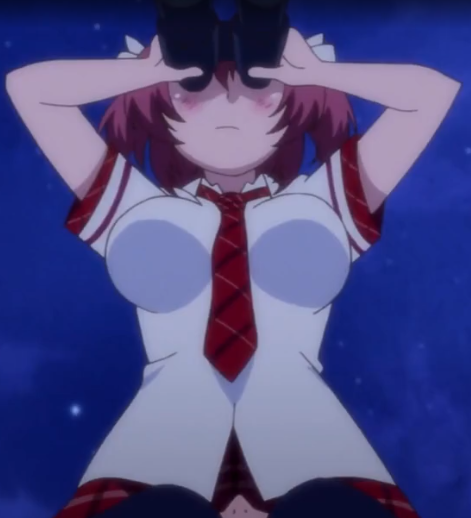 Kakei goes to library to enjoy reading by himself. He then meets a second-year girl named Shirasaki through the efforts of a so-called "shepherd" who fulfills people's wishes. Eventually, his boring life change.

When Kyōtarō was young, he aspired to read all the magic books in the world which were kept in the magic library. To gain access, he acquires a bookmark, which is an entry ticket to the magic library, and he must show kindness and bring happiness to everyone's hearts. Being the sole member of the Library Club, he enjoys the fact that he can read peacefully by himself. After receiving a text from the 'shepherd', which reads his fate is going to change, Kyōtarō encounters a second-year girl named Tsugumi Shirasaki, whom he saves at the train station.

The shepherd is well known throughout the school, and is rumored to appear in front of those who are working hard, and grant wishes.

...Seeing no other options, Kyotaro uses his Shepherd magic, to transport the lights along with Takigawa, Nagi and himself to symposium where Takigawa unknowingly confesses before Mochizuki and everyone in there

It is "urban fantasy".

5
Anime where the a vampire(girl) awaits the reincarnation of her lover
11
A cartoon/anime with a blonde-haired boy with blue eyes and his father(?), they're looking for 7 gems/diamonds
1
Cartoon/anime where a girl turns to stone and the boy has a "hoverboard" and travels around with her body
26
Need help remembering a magic anime with a young girl and her pet
4
Anime character of a girl with black hair, animal ears, pink clothes and with a pink flower in her hair
3
Toonami anime about a boy with a sword and a girl with weird Uzis
6
Anime where a girl tries to heal a boy with extensions from her body
7
Anime about a girl with marks around her neck
3
Anime where the school boy hero is good with puzzles, can fly with an item he collects