It started when she was playing the game, talking with her friends and supposed to meet the "newbie." She even bought items for it, but =was suddenly transported inside a dungeon. She wears a white dress and meets some adventurers. One of them is an elf.

This is How to Live at Max Level.

Joo Se-young, nicknamed ‘Honse Demon King’, suddenly falls into another world ‘Arcadia’. Her confusion is short-lived, but for her as a max level user, her attack on this world is a breeze. She collects cute party members, destroys dungeons to get treasures, and has a relationship with ‘Karad’, a pretty pretty deer. However, the quest of ‘God’, which is conditional on Se-young’s return to the original world , entangles Se-young and her companions in a grand and dark conspiracy! Besides, to complete the quest, you have no choice but to sacrifice Karad… … ? Will she be able to break through the series of legendary difficulties?

The story starts with the main character logging in to the game and chatting with her friends via an in-game screen. One of them reports that she found a "newbie", and offers him to the main character. The game is old and most players are pros, so newbies are rare, and when spotted, it's tradition to engage in extremely aggressive item gifting. 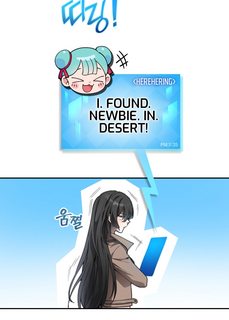 In preparation for meeting this new player, she changes from her standard adventuring outfit to a fancy white dress,

But ends up falling into a quest-related hole and is summoned to another world instead. There is a group of adventurers, and it does include an elf: