I’m trying to remember the name of a book series from the '80s/'90s, set in medieval times, about a girl who finds her power as a witch/healer through the series. I believe the main character is called Sita, but it’s not Hindu or from India at all. More a European setting.

I read them early 2000s but the books were older, borrowed from a friend. There was 3 in the series, I believe. They were paperback and the covers were brown/tan tones with illustrations of the main character in non-specific scenes.

This might be The Black Magician trilogy by Trudi Canavan. The first book is The Magician's Guild, first published in 2001, a little late for the question.

It has a European fantasy setting, is a trilogy with young girl becoming a magician (the term witch is not generally used, perhaps in a historical context in the 2nd story line) with a focus on healing. The main character is Sonea, a girl from a poor family who unexpectedly discovers she has magic during the annual 'purge' when such folk are cleared from town by the eponymous guild. 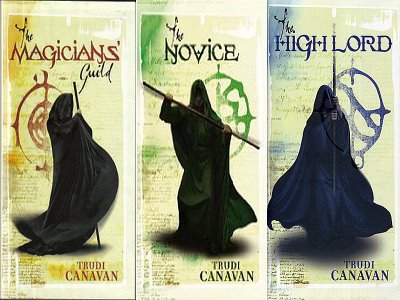 5
Children's book about a girl maybe being influenced by her black cat to become a witch
10
Fantasy book series with non-human races and labyrinth
3
YA book series about a teenage dragon
17
Fantasy series a boy who finds a magic ring which allows him to find other rings
8
80s-90s Book (part of a series?) About Teenager Who Fights Greek Monsters
8
Book about a boy that enters a medieval fantasy PC computer game
21
Fantasy novel/series with young man who discovers he can use magic that is outlawed
6
2000s (I think) YA Fantasy novel series with pendant or stone on cover