I'm looking for a comic book story about a golden-haired villain who could perform mass-hypnosis with his voice. He wore a suit and tried to get a crowd to attack a government building. Our heroes stopped him, maybe by unmasking him? It was definitely from the 80s.

Perhaps you're thinking of the New God, Glorious Godfrey...?

A subpar athlete and hand-to-hand combatant, Glorious Godfrey's greatest gifts are his overwhelming speaking voice and his extraordinary powers of persuasion. 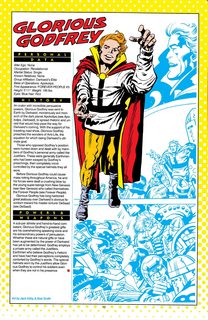 Who's Who: The Definitive Directory of the DC Universe #9 (November, 1985)

In the Legends miniseries (1986-1987), Darkseid sent Godfrey to Earth in the guise of 'G. Gordon Godfrey' to whip up anti-superhero sentiment among the general public. This involved Godfrey actively inciting people to overthrow the US government at one point.

GLORIOUS GODFREY: A government that does not represent its people does not serve its people! Such an evil government must be overthrown! 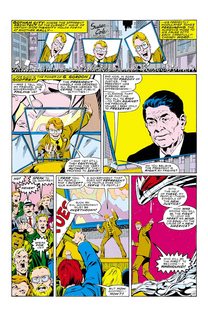 Various members of the Justice League (Superman, Batman, Wonder Woman, etc.) were involved in that story, although Godfrey effectively defeated himself in the end, when he unwisely put on Dr. Fate's helmet, which didn't take too kindly to him.

9
What comic book super hero/villain has appeared with the most "real life" individuals?
1
What's the name of this comic book villain?
5
Superman comic with Green genie/Ming-like villain
9
Webcomic about a robot girl able to use magic who moves to the city to go to school
8
70s-80s DC comic in which a demon devours a man in a Superman costume
3
80s Comic Book issue with young team battling villain wearing power armor
10
Superman comic book with an alien villain who was frozen and dumped in deep space, rather than being executed