Where did you read it?
Online, I don't remember the site.
Art Style?
Japanese Manga
Manga & Anime?
I don't know for sure but I don't think it has a anime adaption, there shouldn't be enough chapters.
Characters
MC was probably an early Adult. I think one of his friends was a Labia that died later.
Fantasy creatures?
There were demi-humans, I can't remember the monsters.
Target Audience?
Probably Seinen, there were some more graphic scenes.
Genre?
I assume Fantasy, Seinen, Action

In the beginning he was held captive in some facility and experimented on.
He had to fight there on a regular basis until he escaped.

This is Kuro no Maou.

Kurono Maou is a high school student who is sensitive of his sharp eyes and bad expression. No girlfriend but gifted with friends in his own way, he had been living a peaceful life. But one day, without any reason, Kurono was attacked by a mysterious headache while in the literature clubroom and fainted. When he finally awoke.......Swords & magic, filled with monsters, an orthodox different world summoning.

The protagonist is a high school student summoned to another world, where he is kept captive via a crown that causes him pain if he disobeys. He's forced to fight, initially against "dolls" and then against humans, and is made stronger. He escapes in the second chapter, running away from a fight against a princess-like woman.

He encounters and befriends a fairy; he moves to a nearby village where he becomes an adventurer, and befriends several demi-humans, including a lamia: 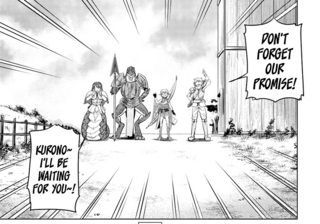 They die in the 9th chapter via a fight with religious purists, led by the woman from the second chapter.

Found by searching mangaupdates for the tag Human Experiment/s, filtered to Seinen and Fantasy.

12
Comic/Manga from early 2000's: thief-like guy with a snarky fairy companion, accompanied by a female mage and a tank
6
Fantasy Manga about Main Character playing a building game
4
Anime movie where a girl meets a butterfly/moth boy
4
Isekai(?) manga where the female protagonist is taken to a fantasy world while sleeping in her bed
4
Manga involving characters with numbers on the backs of their hands
6
Isekai manga where the main character has a servant harem in a world where adventurers are imported because residents are sterile
1
Book, Manga or Anime which begins on a ship and afterwards they pass a big gate into a city?
3
Isekai manga where MC is transported to fantasy world with pixie/fairy love interest