When Mystique shape-shifts, she looks like the person she wants to imitate with their clothes on.

Now, if she removes these clothes and puts them away and then returns to her original form, do the clothes stay there? If so, isn't she violating one of the fundamental laws of physics, that something can't be created from nothing?

Yes, In a very limited sense, the revised version of the character (after her 2001 upgrade) may be able to make very small objects which could retain their existence as long as she thinks about them. She was always able to create small accessories (purses, belts, handbags, hand mirrors, eyeglasses) which augmented her disguises and no one ever thought deeply about it.

I suspect her upgrade was less about making objects and more about turning her into a more malleable and hopefully interesting living weapon. If I were a responsible writer, I would try and keep such transformations into objects into short term events. Or just create a material she could transform in the same fashion as she does her cellular structure.

This required an analysis of her powers and eventually a correction to their description: 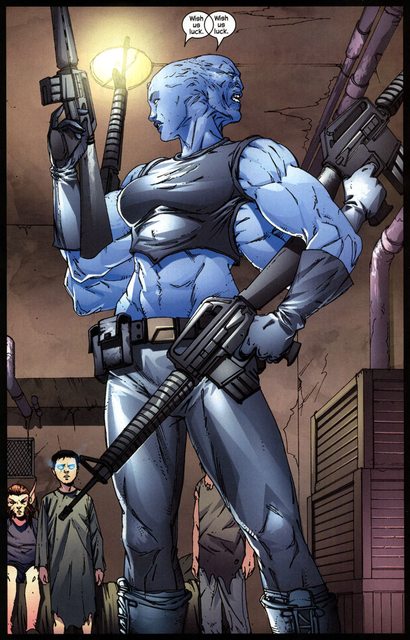 This was clearly the case of a character whose powers were poorly defined and allowed her to do things that were not explained well (where did her clothes come from, how did she take them off, where did the metal in her clothing come from, why didn't she have the power to transform into shapes other than human, why didn't she get any special abilities, etc) and "corrected" during a movie tie-in. This made the character appear physically the same as her movie version and allowed writers to try and clean up and stabilize a power suite that would allow her to keep up with the diverse powers of the X-men.

9
Can Mystique shapeshift into non-humanoid animals in the comics?
5
When was Mystique declared mother to Nightcrawler?
7
How does Mystique change height?
10
Can Mystique replicate a person by just looking at a photograph?
4
Where did Mystique learn her combat skills?
5
How can Mystique mimic a fingerprint?
5
Can Magneto detect magnetic objects without seeing them?