What are the black things the Death Eaters turn into in the movies called?

In Harry Potter, what are those black wavy things the Death Eaters turn into called? I have read the books, but it was long ago. I had just came across a clip today and came to my senses that I had always wondered about this, but have always forgotten.

The company that designed it called it “Death Eater Apparition”.

In the movies themselves, there’s never a name mentioned for the smoke plumes that the Death Eaters turn into. The effect isn’t in the book, it’s a visual effect added for the movies, so the books don’t help to give it a name. The website for a company that worked to help create these effects just called it the Death Eater Apparition effect, or the Death Eater smoke, more as a way of explaining what they mean than an official name.

Syflex: Where in the film can your SyFlex work be spotted?

David: We used SyFlex in three sequences: the Graveyard, Dark Mark (ministry of magic wizard apparition), and the Portkey. There were 4 deatheater shots in the graveyard sequence and in total we created 7 deatheater digital doubles that had to be able to be seen very close up on screen. We had the task of creating the deatheater apparation effect. The Death Eaters were to arrive from the sky amongst an amorphous spear of smoke, stabbing into the ground and suddenly taking form amongst tendrils of this acrid black smoke. The black smoke needed to encircle the Death Eaters bodies, becoming the black of their swirling cloaks as they materialized.
- SyFlex in Harry Potter and the Goblet of Fire

They talk quite a bit about how the specific effect was developed and why it was designed to look the way it does, but they never refer to it by any name other than Death Eater Apparition.

Syflex: You worked mostly on the Death Eaters... Can you tell us what were the director's requirements here?

David: The Death Eaters had to be dark and scary with a really sinister quality to their apparition effect. It needed to look like an 'amoprhous spear of smoke' stabbing into the ground, with a certain level of supernatural control to the smoke as it swirled around the materializing digital double. The director had shot plates of the deatheater actors as he imagined they would step forward out of the smoke at the end of their apparition, so we knew we could create a transition from a digital double to the real actor if we had to. The problem with this was the takeover point from one to the other - matching the exact position of a digital double to the actor at any particular point would have been very time consuming. In the end the cloth simulation and final render of the Death Eaters was so convincing that in a number of the shots we kept the digital double in the shot and left the actor out altogether.
- SyFlex in Harry Potter and the Goblet of Fire

This seems to imply that this company (that worked with the director) pictured it to be a type of Apparition unique to or practiced mainly by the Death Eaters. In that case, it’s a subset of an already named type of magic.

In the image below, the Death Eaters are flying and leaving a black, wavy trail of smoke behind them as they go. Honestly, though, I'm not sure what you're asking. If the black smoke trails are what you are thinking of, just know that they are specific to the movies and are not part of the books. If this is not the answer you are looking for, if you can provide more information, we could probably help you out. 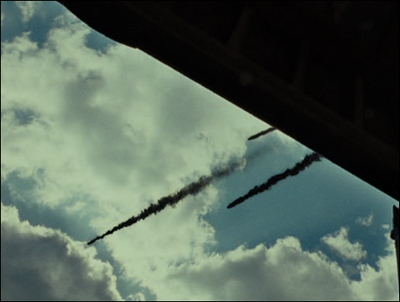 ETA: I'm adding two more pics. The first is the Death Eater "smoke" kind of billowing out from the Vanishing Cabinet in the Room of Requirement in Harry Potter and the Half-Blood Prince as the Death Eaters enter Hogwarts to oversee Draco killing Dumbledore. The second is the Death Eaters returning to their normal, human form, after having been just a smoky essence.

So, the answer is some kind of smoke or smoke-like substance.

Again, if this is not what you're thinking of, let us know and we'll try and help answer your question.

Not the answer you're looking for? Browse other questions tagged harry-potter death-eaters or ask your own question.

16
Has J.K. Rowling ever explained the rules of the 'special effects' (bangs, flashes/jets of light, puffs of smoke) of magic?