Trying to remember this book has been killing me for the better part of a decade, so hopefully someone can put me out of my self-inflicted misery. I read it in the late-90's or early-00's, borrowed from a library, though I'm not sure of when it was written.

In this book, humans are a spacefaring civilisation (though I don't recall anything about Earth being in it, and I don't recall anything about humanoid aliens) that use these glowing wisp things, I think they called "angels", for some purpose. Humans would capture these "angels" in space around some kind of space anomaly, I think called a "fountain", that I'm picturing as some kind of white hole. They would trap these "angels" in crystals or something, and I have a mental-image of people wearing them around their necks, possibly for good luck or protection.

There was some form of conflict, I think space battles between warring factions of humans or pirates, which may have been fought over the control of these "fountains".

It is revealed (not necessarily related to the conflict, but possibly) that these "angels" are actually some kind of sentient alien being, and they can possibly affect human minds in some way. It's possible that they slowly 'degrade' when they're trapped.

I think the book was left on a cliffhanger, so it may be part of a series... but if it is I can't be sure what I read was even the first of the series lol.

I'm sorry about the vagueness of the descriptions, it was quite a while ago and I can't be sure I'm not either combining multiple books (in which case, can anyone identify the multiple books?? haha) or just filling in pieces of one book with age-blurred imagination.

Not sure if this helps or turns out to be a red herring, but I think the word "Andromeda" is involved somehow.

This makes me think of Timothy Zahn's 2001 novel Angelmass which does feature the collection of strange particles called "angels" from a black hole that emits them.

People did wear them, but it was because the "angels" emitted some kind of effect that caused people to be less fearful, less ruled by negative emotions, so that all the leaders of the political group of colonies called the "Empyrean" wore them all the time to help them make enlightened decisions. This worked, and the Empyrean was better governed, happier and more peaceful than the Earth-dominated faction called the "Pax."

Earth tried to attack the source of the angels, at which point it was discovered that collecting the angels resulted in the black hole accumulating a large "charge" of an opposite particle; the black hole effectively weaponized itself to destroy the Pax warship, and became a threat to anything in the system.

The novel does end a bit abruptly; the Empyrean realize that it's dangerous to leave the black hole in such a state of an imbalance and plan to start trying to drop the angels back into it, though how this is to be done, and what that will do to the Empyrean political system are left completely unexplored. 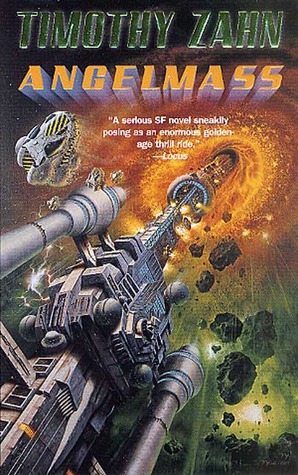 10
1980's book about a boy on a space station that goes to a forbidden Earth
9
Cat-like people who can fly to space on crosses. Telekinetic powers. Cold world. Construct mirrors in space to warm planet. Probably 70's or 80's
7
Alien attack novel, a team of humans are sent on a suicide mission with every human on earth to direct them
9
Sci-fi book about this girl with purple hair and some others travelling into space
9
Looking for an anthology book containing a story about an alien named Ineed by a little girl
8
Book partly set on a prison planet where prisoners are simply dumped and left
12
90s Sci Fi Book about Human tracking alien artifact ripples traveling through space, gets himself and team transported to alien space station